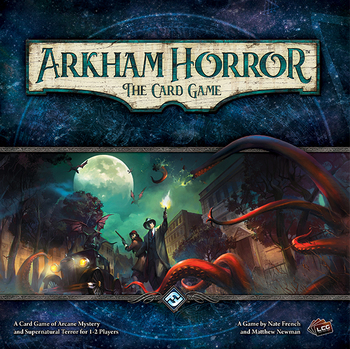 The door to your study has vanished.
Advertisement:

Players control investigators that try to penetrate the occult mysteries of Arkham, Massachusetts. Play consists of investigators moving across various locations, investigating the locations to discover clues and battling enemies and the forces of the Mythos. The plot of each scenario is determined by "act" and "agenda" cards: the act deck describes the objectives that the investigators are trying to accomplish, usually by collecting enough clues from the locations; and the agenda deck describes the forces of evil and progresses slowly but surely as time goes on. If all cards in the act deck are completed, the scenario ends in a win for the players, and if all cards in the agenda deck are completed, the scenario ends unfavorably (but not always a loss for the players).

Each scenario has multiple possible endings, depending on the actions the investigators took during the scenario and the result of the race between the act and agenda decks. Scenarios are generally linked together in a campaign, with the results of each scenario affecting how later scenarios play out. This being Lovecraft, happy endings are hard to come by.

Players are represented in-game by investigators, each with their own special ability and deckbuilding requirements. The investigators are split into five roles that represent the broad archetypes of Lovecraftian protagonists:

Several expansion campaigns have been released, in addition to one-off scenarios and custom fan made content.

Note: Until more cleanup is done on the page, this page includes unmarked spoilers. You have been warned!

open/close all folders
The game in general

Tropes applying to all of them
By the Book (Roland's story)
Bureau agent Roland Banks investigates the series of disappearances in Arkham. All of them have same thing in common: suspiciously close relation to same person, congressman Damien Grey, who's not from Arkham, yet stays here for quite a long already. And then there's that strange goat-like creature which was seen by many. Roland wouldn't go to rest until he breaks that case...
Read or Die (Daisy's story)
Librarian Daisy Walker always loved reading. She also loved horrors, loved to taste her limits. But there're the books best left unread. Daisy's curiosity released some dangerous entity sealed within "Necronomicon", and now only she can capture it again before it hurts someone else.
All or Nothing (Skids's story)
Skids O'Toole, the former convict, has to somehow pay up massive hospital debts left after his (now late) mother. He's gaining money the best way he knows — through gambling. Casino "The Clover Club", run by O'Bannion gang, has a reputation for always staying victorious in the end — "the house always wins". Today, Skids plans to change that.
Bad Blood (Agnes' story)
Agnes Baker was a humble waitress, until one day the memory of distant, ancient life awakened — and with it, her old self's magic. She's slowly recovering what was lost, but now there's someone else who's interested in those old memories (and power hidden behind it), a strange woman named Elspeth — and whatever she plans to do, those plans aren't benevolent...
Red Tide Rising (Wendy's story)
Wendy's father went missing at sea, and never returned; and mother was taken away to asylum. Now, Wendy Adams is alone, and only thing left of her family is amulet received from mother. Until now, she lived on the street, but now she finally has a chance to find out what has happened to her father — a photo dropped by some strange man. Her only hope to find more is to find that man, for which she has to go to Innsmouth...