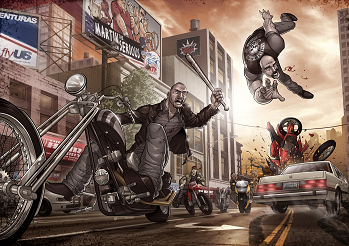 Finian: America's full of gangsters, you know.
Sharon: I thought you said it was full of millionaires.
Finian: That depends on which newspaper you read.
— Finian's Rainbow
Advertisement:

This might be considered the Urban Hellscape counterpart of Eagleland, the perception (more ignorantly so in other countries) of American cities as crime-ridden Vice Cities. This has much to do with the export of American films. Supposedly, you will find French people, for instance, believing that Chicago is still as it was when Al Capone was alive.

While they all derive from the movies, most versions of Gangsterland do reflect violent periods in the history of various cities — at least if you turn your head and squint a little. New York City stand-ins will have violence courtesy of The Mafia, Chicago from the Mayor's office and Prohibition-era bootleggers, Boston from the Irish Mob and Los Angeles from Black and Mestizo Hispanic street gangs. Note that the first is organized crime, the second is corruption (and organized crime), and the third is street anarchy (though the more successful street gangsters move up into organized crime, or die trying). However in terms of treatment of civilians, the first rarely fits into Totalitarian Gangsterism, the second may fit into it (depending on the government) and the third is this full-on. Pray that the people who run the land are Neighbourhood-Friendly Gangsters.

Compare Wretched Hive and Totalitarian Gangsterism (the latter is Gangster Land, but the gangsters also oppress the civilians). Can overlap with City Noir in Period Piece settings such as the Roaring 20s and The Great Depression.

Invoked in Las Paradiso with the Italian mob enemies.

Invoked in Las Paradiso with the Italian mob enemies.