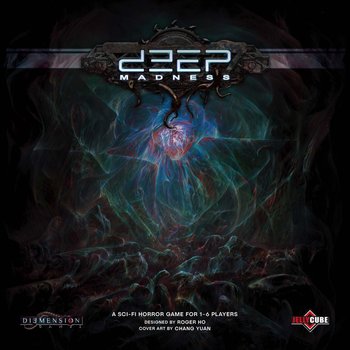 is a 2018 cooperative Adventure Board Game with Cyberpunk, Survival Horror, and Cthulhu Mythos elements, produced by Diemension Games. It was funded by a successful Kickstarter campaign in November 2016.

Something has gone very wrong at the Leng Corporation’s advanced deep-sea mining facility, Kadath. Communications from the facility have gone completely dark, and aside from a general sense that the miners down there Dug Too Deep, no one has any idea what’s going on. In response, the Leng Corporation sends down a team of investigators to analyze the situation, fix whatever they can, and report back to their superiors. Unfortunately for the investigators, almost as soon as they come within sight of Kadath, something attacks their submersible and forces them to make an emergency landing at the facility. The investigators all survive the crash, but they swiftly realize that reality itself seems to be breaking down in Kadath — and horrific, sanity-blasting monsters are forcing their way in through the cracks. Trapped within the stricken facilty and cut off from outside help, it falls to the investigators to find out what happened in Kadath and what, if anything, they can do to stop it… assuming, of course, that they live that long, and don’t go mad in the process.

In addition to the base game, Deep Madness has a number of available expansions:

A prequel game set in the same universe, Dawn of Madness, was successfully funded via Kickstarter in 2019.