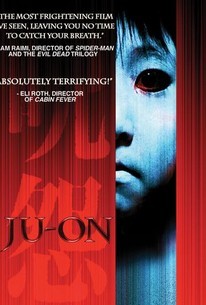 Note: This page is for the Japanese films only. For the American series, see The Grudge.

Ju-on is a Japanese horror film series, directed by Takashi Shimizu. There are currently nine films in the series, including a crossover film, as well as two short films (Katasumi/In A Corner and 4444444444), which were released prior to the first film (and are featured on the Director's Cut DVD release of the first remake as special features).

The title of the films translates roughly to "Curse Grudge". The first two films in the series were so-called V-Cinema, or made for TV releases, but became surprise hits as the result of favourable word of mouth. The curse of the title, ju-on, is one which takes on a life of its own and seeks new victims. Anyone who encounters a ghost killed by the curse is killed himself and the curse is able to be spread to other areas.

The plot focuses on the curse created in a house in Tokyo when Takeo Saeki, convinced that his wife Kayako was having an affair with her crush, murdered her, their son Toshio and Toshio's pet cat, Mar, in a jealous rage. Takeo was later killed by the vengeful spirit of his wife. The spirits now haunt the house, cursing anyone who dare enter - and, by extension, anyone who is even remotely connected to those who have entered the house.

The plot of each film is told in a series of non-linear storylines, with many intersecting subplots.

In 2009, two new Ju-on films were released simultaneously, to celebrate the franchise's 10th anniversary. These are Ju-on: Shiroi Roujo and Ju-on: Kuroi Shoujo. These films are not directly connected to the previous installments, instead focusing on different ju-on curses.

The franchise was rebooted in 2014 with the release of Ju-on: The Beginning of the End, which alters much of the background story. Shimizu did not have a hand in the production, nor did Mrs. Takako Fuji as Kayako, who was replaced by Misaki Saisho. It was followed in 2015 with the release of Ju:on: The Final, which, as the name suggests, serves as the franchise's Grand Finale. A crossover with The Ring series was released in 2016.

There is also a novel adaption of the movies, as well as two manga volumes based on the series.

It is worth noting that the theatrical releases are not remakes of the V-Cinema films, as is commonly believed, but are, in fact, sequels. The first two films, which are quite hard to find outside of Japan, do not have to be seen to understand the later two films, however.

These shorts are set during the first movie, and offer a little more insight into the incidents surrounding certain characters from that film.

In 2009, feelplus developed a Wii game based on the franchise known in the US as Ju-on: The Grudge Haunted House Simulator. Storyline-wise, it is unconnected to any of the films or shorts, and it tells an original story about a family of four who find themselves facing Kayako and Toshio's curse in an episodic fashion.

Not to be confused with Ju-Rei, a different Japanese supernatural horror film that shamelessly rips off this franchise.

Alternative Title(s): Ju On The Grudge