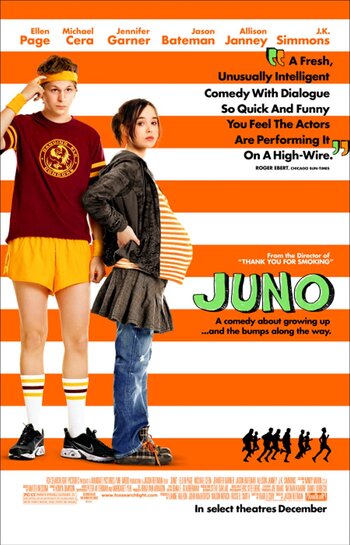 "The best thing you can do is find a person who loves you for exactly what you are. Good mood, bad mood, ugly, pretty, handsome, what have you, the right person is still going to think the sun shines out your ass. That's the kind of person that's worth sticking with."
— Mac MacGuff
Advertisement:

After having sex with her friend Paulie Bleeker (Cera), sixteen-year-old Juno MacGuff (Page) finds out that she is pregnant. After confronting her parents, and considering having an abortion, Juno decides to give her baby up for adoption. Looking in the local newspaper, she finds a couple whom she deems to be the perfect parents — Vanessa and Mark Loring (Garner and Bateman).

Upon meeting the Lorings, though they look like they live a charmed life, Juno sees the couple may not have it all together. This causes her to re-examine the relationships in her own life, and wonder if any kind of love can really last a lifetime.