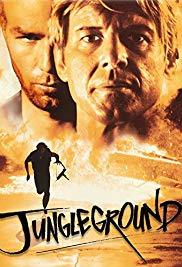 Jake Cornell is a police lieutenant on a sting operation in Jungleground. What's Junglegroud, you may ask? It's a section of the city that's such a complete Wretched Hive that any cop who goes there in uniform is guaranteed to die. And Jake's just been discovered by Odin, a crime boss trying to control the whole area. Now, with his fiancee kidnapped, Jake must survive the night in a place where the law doesn't apply.