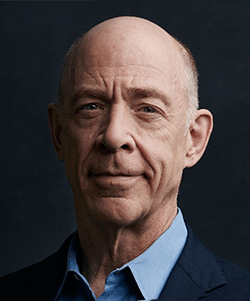 "I don't need a simple picture of him, I NEED A DESCRIPTION! A description of J. K. Simmons!"
Advertisement:

Though active since 1986, his current rise to fame began in 1994 with his 53 appearances as consulting psychiatrist Dr. Emil Skoda across the Law & Order franchise. Since 2001, he has been typecast for Large Ham acting roles, particularly as J. Jonah Jameson across lots of the Spider-Man media (most notably in the Sam Raimi film trilogy), as possibly insane business tycoon Cave Johnson in Portal 2, the Ax-Crazy neo-Nazi prisoner Vernon Schillinger in Oz, and as the sadistic music teacher Terence Fletcher in his Academy Award-winning role in Whiplash. He played the role of Tenzin in The Legend of Korra and was the voice of the Author in Gravity Falls. He also portrayed Nolan Grayson/Omni-Man in Invincible (2021). He's the voice of Yellow in the M&M's commercials as well as Professor Nathaniel Burke of the University of Farmers in commercials for Farmers Insurance Group.

Unfortunately, my suspicions have been confirmed: These lemons are not quite my tempo. Cave Johnson, we're done here.
(Could you pay me in advance?)
PFFFHAHAHAHAHAHAHA!!! HAHAHAHAHAHAHAHAHA!! -- You serious?? Pay you for what, reading this article?? Spider-Man 2 article, tomorrow night eight o'clock! There's the index!

Terence Fletcher scares the hell out of Andrew.

Terence Fletcher scares the hell out of Andrew.