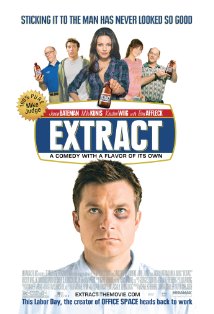 It's about a small business owner. And a missing testicle.
Advertisement:

Extract is a movie released in 2009, written and directed by Mike Judge of Beavis And Butthead, King of the Hill and Office Space fame. It stars Jason Bateman as Joel Reynolds, the owner of a vanilla extract factory and nice guy everyman. Except things haven't been very nice for Joel lately. His frustrations are mounting, partially the result of a handful of incompetent workers at his factory, but mostly because of his marriage having fallen into a sexual rut.

One day, an industrial accident leads to the injury of Step, an employee who longs to be promoted to floor manager: specifically, he ends up losing a testicle. When the news of the incident hits the papers, it attracts Cindy, a young, attractive con-artist, played by Mila Kunis. To track down Step, she gets herself hired at Reynolds Extract, then arranges to meet and subsequently flirt with Joel while searching for information on Step. She succeeds, arranges a chance meeting with Step, and starts dating him in order to manipulate him into suing the company for more money.

Meanwhile, Joel keeps thinking about how Cindy was flirting with him. He discusses this with his old friend Dean, a perpetually drugged-out bartender played by Ben Affleck. Dean encourages him to initiate an affair with Cindy, but Joel is certain he'll feel guilty if he does. After giving Joel a mystery pill, Dean comes up with the crazy idea for Joel to hire a gigolo to have sex with his wife, so he won't feel guilty about having sex with Cindy. Joel, heavily intoxicated, plays along. As expected, the plan does not take place quite as expected.