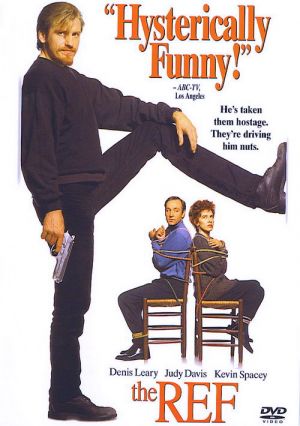 The Ref (Hostile Hostages in some countries) is a 1994 Black Comedy film directed by Ted Demme and starring Denis Leary, Judy Davis, and Kevin Spacey.

Leary plays Gus, a cat burglar who breaks into the house of a millionaire in the hopes of pulling off a job that will let him retire, but he gets tripped up by an... eccentric trap and suddenly has to hide out from the bungling local cops until his partner Murray can secure a way to escape after the entire area is put on alert. To avoid the police patrolling the streets, Gus takes Lloyd and Caroline Chasseur (a highly dysfunctional middle class suburban couple) hostage so he can hide out in their home until the escape is ready. There are just two problems; 1) Lloyd and Caroline are so dysfunctional and angry with each other that they would rather fight than pay any attention to Gus, and 2) it's Christmas Eve and everyone from Lloyd and Caroline's bright delinquent son Jesse (Robert J. Steinmiller Jr.) to their whole extended family is coming over for dinner. (And since this is 1994 and cell phones are very far from common, there's no way to call the Christmas dinner off.)

When Murray can't arrange an escape prior to the extended family arriving, Gus gets Lloyd and Caroline to pass him off as their therapist so he can continue hiding from the cops and make sure they won't blow his cover. However, with all the nasty, petty resentments rising to the surface within the family, it's quite likely that Gus' rapidly dwindling sanity will run out before he can get out of town.