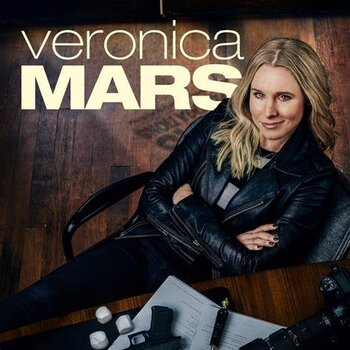 Lamb: Before we go in there, you should probably know something about Veronica Mars. We need to be careful with this one. She's... slippery.
Morris: Sheriff, we have interrogated Al-Qaeda members at Gitmo. I think we can handle a teenage girl.
Advertisement:

Veronica Mars was an hour-long teen drama that ran for three seasons on UPN (later CW). The brainchild of novelist Rob Thomasnote (who would go on to create Party Down and iZombie) and produced by Joel Silver (The Matrix producer), the series combined the Amateur Sleuth/Kid Detective with a healthy dose of Film Noir and class warfare.

The main character is, appropriately, high school junior Veronica Mars (Kristen Bell). She lives in the unincorporated town of Neptune, California, "a town without a middle class": the "09ers," from the prestigious (and fictional) 90909 zip code, are insanely spoiled children of insanely wealthy parents, while everyone else works for the 09ers, mostly as domestics at minimum wage (if that). Veronica, daughter of county sheriff Keith Mars (Enrico Colantoni), was more of an honorary 09er: her best friend was Lovable Alpha Bitch Lilly Kane (Amanda Seyfried), her boyfriend was Lilly's equally-popular brother Duncan (Teddy Dunn), and she was also friendly with Lilly's boyfriend and Duncan's best friend, Logan Echolls (Jason Dohring), son of movie star Aaron Echolls. The Kanes are practically royalty in Neptune; Lilly and Duncan's father, Jake Kane, is a software billionaire, and the largest employer in town; when his company went public, their secretaries became millionaires. It may just be popularity by association, but Veronica's life is pretty good.

Then it all comes apart. Duncan dumps Veronica so hard and so seemingly out of the blue, that she has no idea she's been dumped until Lilly tells her; days later, Lilly is found dead, her head bashed in. Veronica's father accuses Jake Kane of committing the crime, and the town reacts badly, holding an emergency recall election and replacing Keith with his deputy, Donald Lamb. Keith changes his profession to Private Detective, a trade both he and Veronica excel at. Veronica stands by her father through the bad publicity and ends up ousted from the popular clique. Most of her former friends turn on her, none more so than Logan, who becomes, in Veronica's words, a "psychotic jackass" to the world at large. Soon thereafter, Lamb apparently cracks the case, catching Abel Koontz, a former Kane Software employee... but Keith and Veronica don't buy it. Finally, Veronica crashes a classmate's party—largely to spite those shunning her—and ends up roofied and raped. When she attempts to report it, Sheriff Lamb accuses her of lying and throws her out of his office. And, to add insult to injury, her mother Lianne turns to booze and eventually vanishes, leaving Veronica a note saying she'll be back for her someday.

Then, as the first episode actually begins, Veronica reluctantly befriends new transfer student Wallace Fennel (Percy Daggs III). She has by now transformed herself into a hard-boiled detective, helping Keith with stakeouts and taking pictures of unfaithful spouses, and meanwhile solving mysteries for classmates with the help of Wallace, Keith, and other allies including PCH biker gang leader Eli "Weevil" Navarro (Francis Capra), computer whiz Cindy "Mac" MacKenzie (Tina Majorino) and, occasionally, Duncan Kane, Logan Echolls and other 09ers. In the meanwhile, she pursues her own investigations: Who really killed Lilly Kane? Who was responsible for Veronica's rape? And what on earth is Lianne Mars up to?

The first two seasons were known for having a season-long Story Arc. The Driving Questions of Season One have just been covered. Season Two opens with a school bus crash that kills or injures several of Veronica's classmates, with the Marses suspecting foul play and attempting to unravel the complicated motivations behind it; additionally, Logan is implicated in the slaying of a PCHer, Felix Toombs, who was found dead after an altercation which left both Logan and Weevil unconscious. Season Three, where Veronica goes to Hearst College, deviated from the formula in an attempt to attract new viewers. The big mystery format was abandoned, in favor of two short arcs and a hand-full of stand-alone episodes. The show was canceled at the end of the season, going out on an awesome (and heart-breaking, but maddeningly inconclusive) two-part finale.

to help fund a concluding movie. The Kickstarter broke the record for fastest to reach a million dollars

, in four hours and 24 minutes, and reached its $2 million funding goal less than 11 hours in. When the Kickstarter ended on April 12, $5,702,153 had been donated, and the previous record for most donations (87,000 people) was also broken with 91,585 fans sending in donations. As a result, Warner Bros. agreed to distribute and market the film, releasing it to theatres and for download on March 14, 2014 - a year and a day after the Kickstarter launched. Additionally, six months later a Web Video Spin-Off, Play It Again, Dick!

, launched on CW Seed. It centers around Ryan Hansen's adventures in attempting to greenlight a Spin-Off of the show centered around his character Dick Casablancas and involves Hansen, Bell, Dohring, and others engaging in some unabashed Adam Westing.

In August 2018, it was announced that an eight-episode revival of the series had been ordered by Hulu, with Kristen Bell and most of the original cast set to return. The long-awaited fourth season finally arrived on Hulu in July 2019, preceded by the addition of the entire series (minus the movie) that same month.

Now has an episode guide, a character index and a page for the movie and follow-up novel series.