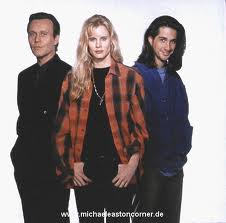 "Welcome to the game, Sydney Bloom."

VR.5 is a short-lived science-fiction drama show that aired for less than one season in 1995 on Fox. It was part of the burst of interest in virtual reality that occurred in the mid-to-late 1990s.

Sydney Bloom (Lori Singer) works as a telephone engineer, but she's also a computer genius playing with virtual reality (VR). One day, she accidentally discovers that she can take other people into VR5 (full immersion VR) with her, just by calling them up on the telephone. Once inside, she can find out about them, but afterwards, they have little or no memory of the incident. For reasons which only become clear in the series finale, Sydney and her childhood friend Duncan (Michael Easton) seem to be the only people who can take people into VR5. The shadowy "Committee" discover her talent, and co-opt her to do investigations for them.