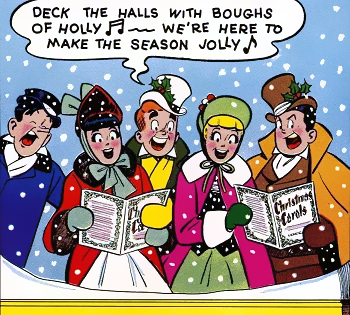 Ah, Christmas time! When the trees are trimmed, presents are wrapped, and people form troupes and go around singing Christmas Songs. It's just one of the ways to establish that it's that time of the year again.

Carolers are often used in works to establish the season and help create the environment. But they differ from other such things, Christmas trees, lights, wreaths and holly and mistletoe, in that carolers are actual characters and thus are able to interact with each other and/or with others, and at times can even affect the plot of the story.

If participating, the characters may be the ones arranging it or at least willingly joining in, or they may be pressed into it and dragged along, in which case they will either do everything they can to ruin the experience for everyone else, or will gradually come to enjoy themselves. If listening they may pause to appreciate the singing, perhaps dropping some cash if the carolers have a donation box or they may simply ignore them or even yell at or chase them off, which is common for The Grinch or the Scrooge.

The carolers themselves can be anything from a family or group of friends who get together and go sing to people, to a full choir singing on the street corners or in the city parks in seasonal costume, often styled after nineteenth century England or early twentieth century America. While they are often shown in small choirs, this is not necessary; it may only be a single person going around singing to friends and neighbors (singing talent optional).

In a fantasy setting, carols for a Christmas Equivalent could also count.

A staple of the Christmas Episode. Not to be confused with fans of A Christmas Carol. Satirical and mock carols will often be an Anti-Christmas Song.

Linda, the kids, and Teddy go caroling through Mr. Fischoeder's neighborhood, only to find disappointment.

Linda, the kids, and Teddy go caroling through Mr. Fischoeder's neighborhood, only to find disappointment.