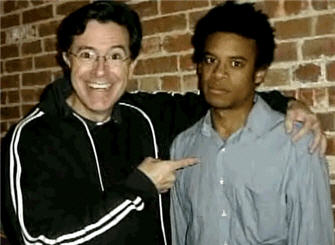 "Some of my best friends are sassy black people!"

So, you're hip. You're smart. You've got class. And when you say "Some of My Best Friends Are X", you want people to know that there is credibility behind that statement. What's the best way to show it? By having a black Best Friend!

Your black best friend is sassy. She's never too busy to lend an ear, or come along on your wacky schemes. She is flawless to the point of being unreal. (Until it's time to save the day of course. That's what white heroes are for.) Is it because she has no love life, no apartment, and no family? It's hard to say, but there's one thing for sure. She has a cell phone, and never ignores your calls.

Note: This is a black character whose role either A) revolves almost entirely around a white character or B) serves as a conscious effort for a white character/writer to appear inclusive. Simply being black as well as friends with a white character does not automatically make a character this trope. A black character who's shown to be just as relevant as their white counterparts does not count as this trope. Black characters with their own story, their own distinguished identity and goals; characters who undergo personal growth shouldn't be listednote For instance, Green Lantern John Stewart, although created in the same era as The Falcon and James Rhodes, was never created to be a sidekick. He was initially a reservist who was assigned to fill in for Jordan when he was not available for duty and had his own life to lead otherwise. In addition, black people in Real Life should definitely not be listed. Living beings do not exist in accordance to another person based on ethnicity.

See also Magical Negro, Token Minority, Satellite Character, and Gay Best Friend. May also be Black and Nerdy. Some of the clunkier examples of Token White invert the race aspect of this trope,note Technically a full inversion would be the black lead having a multifaceted and well written white best friend. being someone there just to add diversity to a cast.

We meet Remy Remington, an African American in Big City, whom Cricket immediately becomes friends with.

We meet Remy Remington, an African American in Big City, whom Cricket immediately becomes friends with.