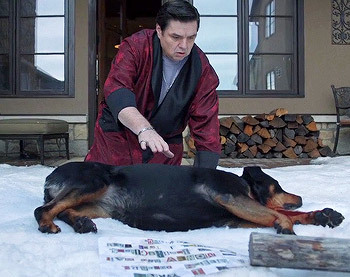 Michael Westen: Friend of mine, Cara Stagner, she has a rat problem.
Alvaro Desantos: And you come here? Sounds like she needs an exterminator.
Michael: Little late for that: they're nailed to her door.
— Burn Notice, "Fight or Flight"
Advertisement:

Want to send someone a message stronger than just throwing a brick through their window? Then throw a dead animal through their window instead. Or nail it to their door. Or just dump it on their door step. Whatever method you chose, the message will be clear: that you are willing to kill and that they could be next.

A character's pets are especially at risk of being targeted, especially in horror shows where pets almost never survive and are usually the first victims of the killer. Often combined with Break-In Threat.

Of course, this can also set off the Animal Wrongs Group.

The equivalent when done with a human is Dead Guy on Display (if done for intimidation).