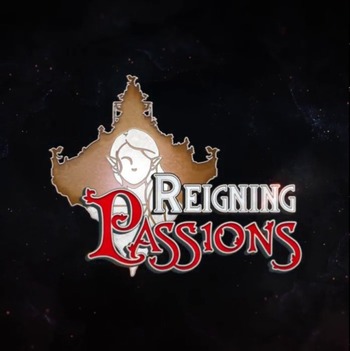 Reigning Passions is a Romance Game Visual Novel by Voltage Entertainment USA, released through their Lovestruck app for iOS and Android devices. It debuted as a pilot in September 2019 with two available routes, and was confirmed for a full series in November.

The land of Lysende was ruled by a queen and her wife. They were benevolent rulers, and under them, the land knew an era of peace and prosperity. Together, the two had a daughter. But soon after the child's birth, there was an assassination attempt against the royal family. The queen consort escaped with the newborn princess in a magical snow. The remaining queen, in her despair, fell into a magical sleep, and the land entered an everlasting winter.

The four noble houses fought for the right to rule, resulting in war. Finally, they agreed to share power, and the capital, Altadellys, was divided into the four Seasons.

Generations later, a pointy-eared child is abandoned at a crossroads. She is raised as an orphan, and grows up to be a humble village barmaid. One day, she is summoned to the capital, where for one reason or another, she will find herself living the life of a lost princess. And it is here our story begins…