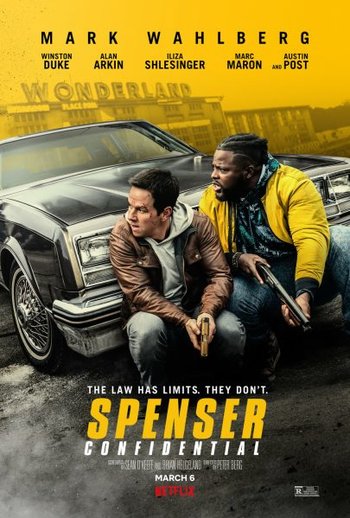 Spenser Confidential is a Netflix-original film directed by Peter Berg and starring Mark Wahlberg, Winston Duke, Alan Arkin, Iliza Shlesinger, and Bokeem Woodbine. It is loosely based on the novel Wonderland by Ace Atkins, who was given the task of continuing the Spenser stories by Robert B. Parker.

Spenser is a disgraced Boston cop who is released from jail after serving a five-year sentence for brutally beating his superior officer Captain John Boylan (Michael Gaston) after seeing Boylan beat his wife. Free and planning to start fresh in Arizona as a truck driver, Spenser nonetheless finds himself drawn into a violent conspiracy as events from his past begin to resurface. Complicating matters is the fact that Henry, an old friend, is forcing him to room with Hawk, an imposing, yet New Age-y ex-con, while Cissy, his on-again-off-again girlfriend keeps confusing him with her hot-and-cold personality.