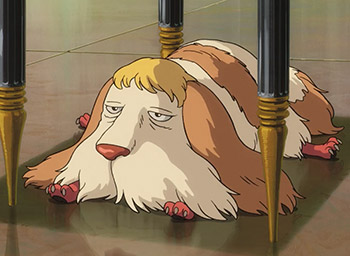 "The dogge must lerne it, whan he is a whelpe, or els it will not be."
— John Fitzherbert, The Boke of Husbandry
Advertisement:

An old dog, typically seen in a rural setting. It is frequently male, often will be some sort of hound, and usually splits its time between sleeping and barking. Sometimes known for having been a good tracker or hunter in the past.

In talking-animal fiction, the Old Dog may be portrayed as a grandfatherly character, or just as a crabby old guy.

On a more cynical note, old dogs are legendarily unable to learn new tricks. However, plenty of owners will dispute that and call it a wives' tale.

The dog's death (apparent or real) can be a Tear Jerker, a Black Comedy Pet Death, or even both.