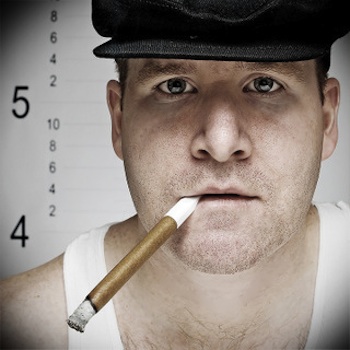 Poor 'n Irish me feckin' arse!* Jus' look at me hat!
"When I was your age they would say we can become cops or criminals."
— Frank Costello, The Departed
Advertisement:

The Mafia.... BUT IRISH!! No, not slang for the cops. Organized crime, Irish-style.

Like The Mafia and The Mafiya, the Irish Mob is strongly linked with poor immigrant communities. Mostly this means The United States, but they can also pop up in stories set in Britain (perhaps as London Gangsters), as well as back home in Ireland itself.

A distinction should be made between the Irish Mob and groups like the IRA and the INLA. While there is some overlap in fiction (and reality), for the purposes of this trope the Mob are Irish organized criminals motivated primarily by profit rather than the Cause. In settings where both are present, this is a likely bone of contention between two groups that normally start out working together.

The Mob originated in the early 19th century and — until the rise of the Italian and Jewish gangs in the 1880s and later — was the dominating force in New York organized crime. During The Roaring '20s, the Mob was a major player and many gangster movies featured Irish gangsters — famously James Cagney made a career out of playing them, starting with The Public Enemy (1931). Nevertheless, the Irish Mob waned after these years, struggling under competition with the Italian gangs and their own leadership struggles. They also slowly became less necessary: the Irish communities in America and Great Britain gradually assimilated and no longer needed gangs to protect them from disgruntled locals (because they were the disgruntled locals). Not that they ever went away—both in reality and in fiction the Mob has maintained a presence to this day, especially in South Boston.

The Irish Mob is often depicted as more anarchic and "casual" than The Mafia, preferring shabby pubs, flat-caps, and t-shirts to Italian restaurants, fedoras, and two-piece suits. This also has some basis in reality, as one reason why the FBI had such a hard time running down James “Whitey” Bulger’s infamous Winter Hill gang was that, unlike the Mafia, with its well-defined hierarchy and chain of command, the structure of Bulger’s gang was much more fluid, with incarcerated/dead members very easily replaced and operations easily moved or abandoned on short notice.

Boston is especially associated with the Irish Mob, but, as noted above, they can turn up anywhere. Notably in recent years, it's become increasingly popular to set a work with the Irish Mob in Ireland itself.

In "Bitlife but I make organized crime extremely unorganized," Kevin (who is Irish himself) has his character join an Irish mob. Despite his complete loyalty to the mob, they show him very little respect.

In "Bitlife but I make organized crime extremely unorganized," Kevin (who is Irish himself) has his character join an Irish mob. Despite his complete loyalty to the mob, they show him very little respect.