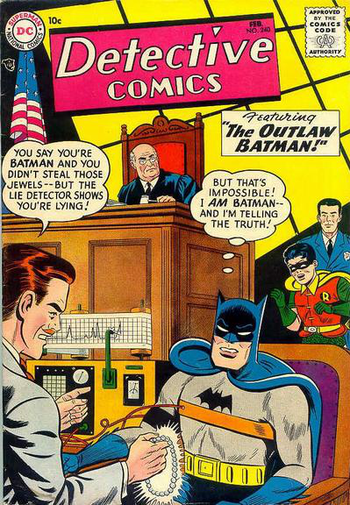 "Believe me, it is a great deal better to find cast-iron proof that you're innocent than to languish in a cell hoping that the police, who already think you're guilty, will do it for you."
— Dirk Gently, Dirk Gently's Holistic Detective Agency
Advertisement:

The hero/es have been falsely accused of a crime they did not commit.

Maybe they were just in the wrong place at the wrong time—in line at the bank when it got robbed, or riding in the same subway car as a murder is committed and happens to look exactly like the one who did it. Maybe they were the ones who found the body and accidentally left their fingerprints on the murder weapon. Maybe the series' Big Bad has deliberately framed them to get them out of the way. Or perhaps it was a False Friend spreading the accusation via rumors to disrupt The Team. Maybe it's a Government Conspiracy to silence them because They Know Too Much. It might also involve an Evil Twin or some other type of imposter.

Whatever the root cause, the phony evidence is so convincing, or the convergence of bad luck that makes them look guilty is so unlikely, our hero struggles to convince anyone of their innocence. Even their own friends and loved ones seem ready to write them off guilty as charged. (With this belief sometimes persisting.)

While there are many different ways for the character to prove their innocence, the most common method used to set this Miscarriage of Justice straight is to find the real criminal and bring them to justice. This can take an episode or two, or it can be the premise behind an ongoing arc.

Sometimes this can be resolved while the hero is out on bail, or perhaps it has to wait until they complete their sentence. If they're supposed to be in jail, then it also becomes a Stern Chase. If they're in jail and put in a Deadly Game or Blood Sport, they become a Condemned Contestant.

If the protagonist actually commits some crimes in the course of trying to clear their name, then they will likely benefit from Wrongful Accusation Insurance—though most of them obey Would Not Shoot a Good Guy. Selective Condemnation is an extremely contrived Video Game variant. If the injured party (or a relation of theirs) won't stop blaming the character despite the new evidence, they're usually clinging to an Irrational Hatred.

If the hero has to clear someone else who has been wrongfully accused of a crime, it's Clear Their Name. When the hero accuses the (innocent) villain of wrongdoing, it's Not Me This Time. Contrast Taking the Heat, where an innocent person attempts to pin the guilt onto themselves to save someone else, and Then Let Me Be Evil, where the hero decides that proving their innocence is not worth it and straight up becomes exactly what they are accused of. Compare We Need to Get Proof.