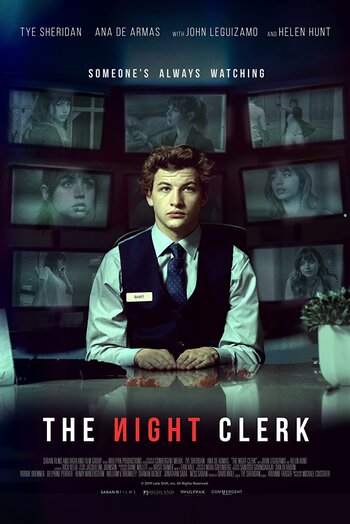 The Night Clerk is a 2020 American film written and directed by Michael Cristofer.
Advertisement:

Bart Bromley (Tye Sheridan) is a hotel night clerk with Asperger's who hides cameras in guest rooms in order to observe and mimic normal behavior. One night he witnesses a woman named Karen (Jacque Gray) being murdered by her boyfriend. Bart is reluctant to show the footage to the police because of his own illegal activity, and his odd behavior makes detective Johnny Espada (John Leguizamo) suspect he did it. While the police investigate, Bart is transferred to a smaller hotel in the same chain, where he falls in love with the guest Andrea Rivera (Ana de Armas).

The Night Clerk contains examples of: