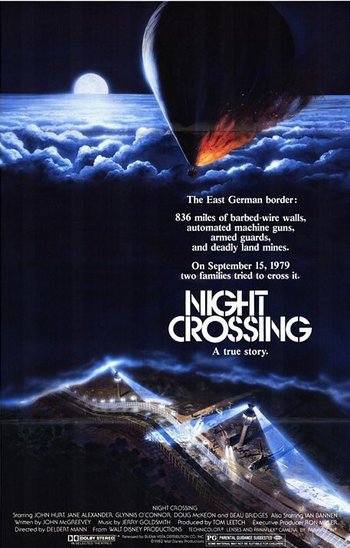 To freedom in just 28 minutes!
Doris Strelzyk: You want us to climb into a balloon and float away to West Germany?
Petra Wetzel: Come on, it isn't funny to make jokes about going to the West.
Doris Strelzyk: They're not joking.
Advertisement:

Night Crossing is a 1982 Disney movie made during their period of films aimed more at older audiences. It's the based-on-a-true-story account of the Strelzyk and Wetzel families' escape from East Germany in a homemade hot air balloon on the night of September 15, 1979.

That's right. This is a true story, and a truly remarkable one at that.

The year is 1978. East Germany has sealed its border with the West for over fifteen years, with life for its citizens being dull and bleak. Thousands continue to attempt to escape to West Germany, but the majority fail and they are either arrested or killed. In Thuringia, a teenage boy attempts to escape by driving a bulldozer through the border zone. He fails and is shot to death by the military. His death causes his family to be taken in for "questioning" and spurs their friends, the Strelzyks and Wetzels, into wanting to escape. Peter Strelzyk (John Hurt) hatches a daring plan with Günter Wetzel (Beau Bridges) to build a balloon that will carry both their families out of East Germany. For months, they work to sew the envelope in their attic and construct a suitable burner. With their large purchases of fabric being monitored by the Stasi, they must work quickly before they too are arrested.

The 2018 German film Ballon also tells the story of the escape.