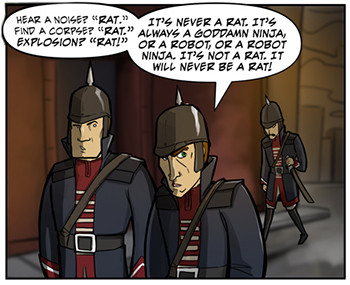 "It's not just the wind. It's not all in your head. And it's definitely something to worry about."
— Bump in the Night,

One of the heroes receives a broad hint that something unpleasant might happen — any kind of bad thing, from the plans of a Mole to a debilitating disease. It could come in the form of a prophecy, an important clue picked up off a defeated enemy, an inconclusive medical test... the form varies depending on the context.

In a classic example of Genre Blindness, the hero carefully evaluates the hint and concludes almost immediately that it is most likely meaningless, regardless of the reliability of its source. And he will keep doing that even though additional, corroborating hints start showing up, until it is almost too late.

Because if he didn't, he'd solve the mystery, foil the criminal, or seek out proper treatment in the first act of the show, and then where would we be for the next forty-five minutes?

Which is why, on the rare circumstance that the hero does go after it — it proves to be a Red Herring.

Many security guards (especially in video games, for gameplay reasons) are prone to this as well. Hearing a noise or seeing something out of the corner of their eye, they'll investigate for a moment, or their "more experienced" partner will tell them it's just a rat, or a stray dog, or something else innocuous, and say something along the lines of "It's probably nothing". At which point they get knocked out/captured/killed/eaten. (See The Guards Must Be Crazy.)

This is an instance of someone holding the Idiot Ball, provided the event is out of the ordinary in some way. Expect The Great Detective to berate the fool for his casual dismissal of the occurrence, probably during The Reveal.

Possibly the opposite of a Cat Scare. Not to be confused with Within Parameters, which is related. Also related to Convenient Decoy Cat.

A case of some Truth in Television as each area has a large assortment of ambient sounds that individuals become familiar with and often ignore possibly at their detriment. Similarly, as a part of the "denial response" or "freeze response" that is just as much a reaction to danger as fight or flight, it is also Truth in Television that people tend to dismiss or ignore unusual bodily symptoms (even those of blatant heart attacks or strokes or obvious cancers), fail to call the fire department during the early stages of a potential fire, insist on ignoring tornado warnings until they can sight the tornado, often don't flee or shelter from disasters in general, and don't flee or defend against criminal attack (even to the degree of locking doors or calling police) until it's far too late. The key to not letting this trope kill you in real life is to keep in mind that if you are saying "it's probably nothing," something has made you say that, and further investigation (or in the case of a disaster, just getting the hell out of there and/or obeying the warnings) might be an inconvenience that proves it was nothing after all, or it might save your life.