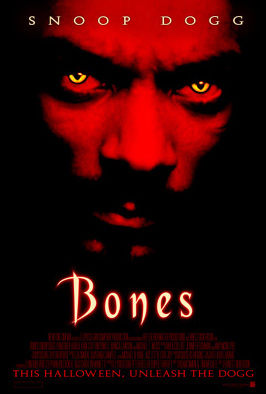 Bones is a 2001 American horror film directed by Ernest Dickerson and starring rapper Snoop Dogg as the eponymous Jimmy Bones, a murdered gangster that rises from the grave to avenge his death. The movie is an homage to blaxploitation films of The '70s and incorporates numerous elements from the genre. The film stars Snoop Dogg as Jimmy Bones and Pam Grier as Pearl. Other cast members include Katharine Isabelle, Michael T. Weiss, Clifton Powell and Ricky Harris among many others.

The movie is about Jimmy Bones (Snoop "Doggy" Dogg), who is a legendary protector and patron of his thriving neighborhood. Cool, handsome and respected - Bones is the benevolent caretaker of his people until he is betrayed by those closest to him. Flash forward 20 years, crime and drugs have crumbled the neighborhood and Jimmy Bones has become a charismatic emblem of better times. But his spirit is about to make a comeback.