Film / The Book of Eli 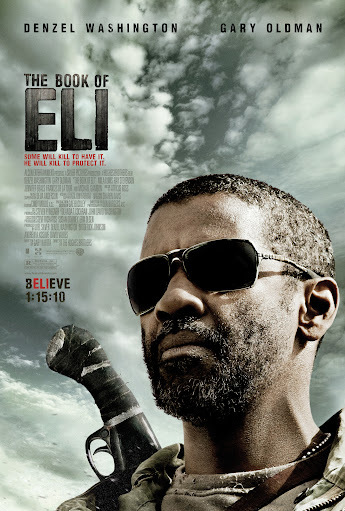 "I walk by faith, not by sight."
"Both thorn and thistles it should bring forth, for us. For out of the ground we were taken for the dust we are, and to the dust we shall return."
— Eli, quoting The Bible just before kicking the shit out of everybody in the room.
Advertisement:

A 2010 post-apocalyptic Action Thriller film directed by the Hughes Brothers, starring Denzel Washington, Gary Oldman, and Mila Kunis. Think a live action adaptation of Fist of the North Star with a Race Lifted Kenshiro, or Fallout with Christianity instead of The American Dream.

In the not-too-distant future, some 30 years after the final war, a solitary man walks across the wasteland that was once America. A warrior not by choice but necessity, Eli seeks only peace but, if challenged, will cut his attackers down before they realize their fatal mistake. It's not his life he guards so fiercely but his hope for the future; a hope that he has carried and protected for 30 years and is determined to realize. Driven by this commitment and guided by his belief in something greater than himself, Eli does what he must to survive—and continue. Eli must keep moving to fulfill his destiny and bring help to a ravaged humanity. Only one other man in this ruined world understands the power Eli holds, and is determined to make it his own: Carnegie.

A very intense bar fight where Eli quotes a verse from the bible before slaughtering everyone.

A very intense bar fight where Eli quotes a verse from the bible before slaughtering everyone.