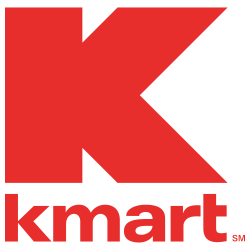 Kmart is a discount store located in the United States, Australia, and New Zealand. In the US, for several decades peaking in The '80s and Early '90s, it was a staple of reasonably-priced no-nonsense merchandise geared toward middle-class shoppers. In the latter two countries, it's a low, low, low-end discount store licensing the name.

Kmart's roots trace back to the dime store chain S. S. Kresge, which was founded in Detroit in 1899 by Sebastian S. Kresge. The company was officially incorporated in 1915 with 85 stores, and despite shedding some stores in the Great Depression, worked its way up to more than 600 stores by The '50s.

The first Kmart (or K-Mart, as it was then known) opened in the Detroit suburb of Garden City in 1962note that location remained open until a string of closings in early 2017 claimed that store as a casualty, followed by a second in Pontiac, Michigan mere months laternote closed in 1992 and replaced by a newer store in neighboring Auburn Hills which itself lasted until bankruptcy forced its closure in 2003. Expansion was rampant throughout the end of The '80s, causing the then Kresge Corporation to kill off the dime stores entirely in 1987 and officially change the company name to Kmart. Other dime store chains began to play Follow the Leader and open their own massive discount stores: F. W. Woolworth company launched Woolco, J. J. Newberry attempted with Britt's, and W. T. Grant with Grant City. Many of the competitors were largely unsuccessful in the long run, and their demise gave plenty of fodder for fast expansion. Early Kmart stores were often paired with grocery stores called "Kmart Foods" which were often supplied by local grocery chains, although these died out early on.

One particularly noteworthy sales gimmick was Kmart's so-called "Blue Light Specials", surprise 15-minute in-store sales offering deep discounts on various items. These were announced with an actual flashing blue police light (which could be moved around the store to the location of the sale item) and the memorable Catchphrase, "Attention, Kmart shoppers! There's a Blue Light Special." These proved so popular with bargain-hunters that at one point Kmart's mascot was a talking blue light bulb named "Mr. Blue Light". Though the sales were officially discontinued in the early 1990s, they have been Un-Cancelled several times, most recently in 2015

Kmart was still successful throughout the 1980s, peaking at over 2,000 stores. Unfortunately, Kmart fell to a rather distant third place in the discounter race by the end of the 1990s and beginning of the 21st century. This was mainly due to competition from Walmart and Target,note which incidentally also opened their first stores in 1962 the rise of online retailers, outdated stores (many of their stores still featured points-of-sale and stocking systems from the 1980s if not earlier), poor location build-out (piloting smaller stores in rural areas and buying locations out from rivals left them with a very scattered and inconsistent store base; although they tried to alleviate this with relocations in the early-90s, many were too little, too late), deranged leadership, and general incompetence. The chain underwent rounds of closures in 1994 and 1995 to shed some less profitable locations, in addition to dropping every non-Kmart division. This included all of their locations in Mexico, Canada (sold to Zellers in 1998; they then sold to Target in 2013 and failed, closing in 2015), and Australia (which still operates independently of the parent company). They also dumped a myriad of related chains: a supercenter called American Farenote which failed after only three stores, although the name lives on as one of Kmart's private brands; home improvement store Builders Squarenote sold to Hechinger in 1997, closed in 1999; bookstore chains Borders and Waldenbooksnote spun off into their own company which went under in 2011; office supply chain OfficeMaxnote sold off in 1995; continued to hold its own until merging with Office Depot in 2013, though both nameplates are still in use; Pace Warehousenote a warehouse club similar to Sam's Club, to whom many locations were sold in 1993; Payless Drugsnote sold off in 1994, bought out by Rite Aid in 1996; West Coast Rite Aid stores continue to offer Payless's Thrifty Ice Cream; and Sports Authoritynote sold off in 1995 and did well until being saddled with massive debts in a 2007 management buyout; went under in 2016. Although Kmart tried to freshen up some stores with a "Big Kmart" prototype that featured a small selection of foods and other merchandise, it did little to reverse the start of the decline.

In 2002, Kmart filed for bankruptcy, and another wave of closures ensued... then another, and another, and so forth. In 2005, it merged with Sears and began carrying Sears' Craftsman and Kenmore brands, although not power tools or heavy appliances at most locations. Some of the stores are merely maintained for the real estate between them (the impetus for the Sears merger) and close when inevitably the land price becomes higher than maintaining a store there; for instance, the Kmart near Green Bay, Wisconsin's Lambeau Field happily closed when the Packers offered a mint to the company for the land. The merger of Sears only seemed to magnify that Sears, too, suffered from many of the same issues (including poorly-run, outdated stores in bad locations), and only brought both chains into a downward spiral that has lasted most of the 21st century.

Kmart had seen a bit of resurgence with its "Shop Your Way Rewards" program, in which membership is free and members receive points on every purchase made good for future purchases. Those who sign up for e-mail receive a number of pretty big discount offers, as well as the chance to enter contests for more points. They also have the option of dispensing with a paper receipt and instead having it all e-mailed. Of course, these days, though, there's not much point in being part of a rewards program if you don't have somewhere to earn and spend it and what mileage Kmart had earned from the program has faded because of this.

In October 2018, Sears Holdings (Kmart's parent company) filed for Chapter 11 bankruptcy; with new holding company TransformCo Holdings acquiring the chain at the last moment in early 2019. Kmart's condition effectively remained stable until the aforementioned August 29, 2019, announcement of 77 store closures by December 2019 and a series of additional closures announced in late 2019 and early 2020; with the rapid number of closures post 2019 becoming such that the number of remaining locations is difficult to keep exact tabs on, though one source has a count of approximately 10 as of January 2022

. By February 2022, the number of U.S. stores had apparently dwindled to four

References to Kmart in media include...