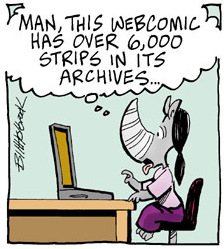 Plus or minus 3,000 at this point.
"Even though the adventure began recently, it's already over 3000 pages long. You just don't have time for this bullshit. You'll catch up later."
— Dave's thoughts,

You've just discovered a new Webcomic. Maybe a friend told you, maybe you were pointed to it by another site. Heck, maybe it was This Very Wiki or the other one.

Like any new reader, you read the strip on the main page. It looks good; the art passes muster, the writing's okay... Sure, you'll read this comic. So you hit the "First Strip" button.

And then you see the date. This strip started eleven years ago. Beads of sweat form on your forehead. You hit the "Archive" link...

Holy Mother of Shakespeare! There are hundreds upon hundreds of comics in here! Even with the longest Archive Binge of your life, it'll take you forever to read all of these!

This is the Archive Panic: when a reader is scared off from reading a comic by the sheer volume of its archives. This is far more common with daily comics, which can easily have lengthy archives by sheer weight of longevity.

Now consider a person who has a lot of free time and a fast connection to the Internet, and who reads five strips a minute. To get through that Monday through Friday comic, he would need almost four and a half hours of continuous reading.

Now, while that isn't a lot of time, most people won't want to or won't be able to binge like that. Broken up into short shots, that time can stretch into months; it's easy to imagine someone not having that sort of willpower. This problem is exacerbated when strip-a-day comics are archived on one day per page, rather than one week per page. Thus the time to click the 'next' button and the time for the page to upload can equal the few seconds needed to read each day's strip.

What's worse is that the strip is continuing to update while you're reading through the archive, making it even harder to catch up. Even worse is if the strip doesn't continue to update: there's the risk of it coming to an end. Few things are more disheartening than finally catching up with the current strip and seeing an author's note listing the end of the comic. In two weeks from now.

Strips with less intense update schedules (say, three times a week) rarely suffer Archive Panic, nor do strips that have suffered various Schedule Slip incidents. (It's less of a hassle to read through the archives of a strip that began 10 years ago if it spent seven of those years in various hiatuses.)

Video Games might be the most subjective medium for this trope, since how long one spends on a game can vary from person to person. Factors include how challenging one finds the game (and which difficulty they play on), whether or not they are going for 100% Completion, and how long they spend on the minigames. A game that one person breezes through might take hours more of playtime for another, and that's just on one entry in a series.

lets you subscribe to a webcomic's archive via an RSS feed at a rate you choose, allowing you to attempt to avoid panic. Another tool to help is Piperka

which helps you keep track of a few thousand webcomics you might be reading. Piperka's page counts can also be useful for keeping the webcomic subpage updated. For podcasts, Spotify lets users speed up the playback speed of podcast episodes.

See also Doorstopper, Commitment Anxiety. May be eased if the author has decided to make some New First Comics to give readers a safe starting-off point. Can lead to thinking "Are We There Yet?"