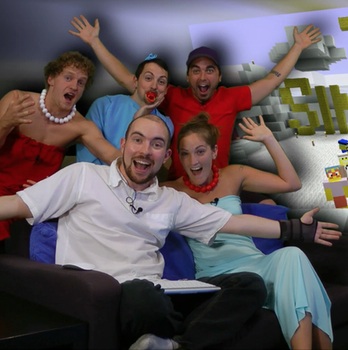 The VGA cast, cosplaying as The Simpsons
Advertisement:

Video Games Awesome! is an online show centered around a group of friends who sit on (and behind) a couch and play video games, offering their opinions, cracking jokes, and sometimes just hanging out. It began in June 2009 as a spin-off of Awesome Video Games, as a way for the creative team behind that series to release content and stay visible between updates of AVG. Since then, it has more or less overtaken its show of origin in terms of content and popularity. Currently, the show is hosted by Fraser Agar and Becky Blow; before the show's move to Japan in mid-August 2018, there were also regular co-hosting appearances by Kyle Huinink, Deacon Publicover, and Ben Taylor (who temporarily left the show to attend college but eventually returned). For now, the latter three are expected to only reappear in special reunion episodes.

Much of the show’s appeal stems from its casual and laid-back atmosphere. The show is unscripted and intentionally does not focus on hardcore gaming, instead emphasizing fun above all. Many installments are designed to provide the perspective of gamers approaching a game for the first time; to that end, most of the games played are current at the time of the episode's release (though they have occasionally dabbled in retro gaming with titles like Earthbound and Doom), and usually some or all of the cast has not played the game before, allowing for genuine first impressions and reactions.

(note that the latter is updated on a more regular basis), and livestreamed on Twitch here

In this Mass Effect 2 playthrough, the attempt to sneak into Hock's room goes awry when Frasier tries to silence the guards - all of whom scream VERY loudly as they die. "So much for stealth!"

Example of:
So Much for Stealth

In this Mass Effect 2 playthrough, the attempt to sneak into Hock's room goes awry when Frasier tries to silence the guards - all of whom scream VERY loudly as they die. "So much for stealth!"