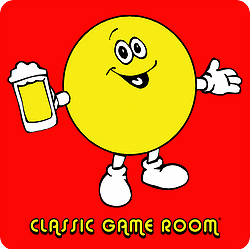 Banished from Earth, Classic Game Room broadcasts from the Intergalactic Space Arcade on its never-ending quest to review...EVERYTHING!

The first incarnation was known as The Game Room was a subscriber feature on the website "From US Alive". Presented by Mark Bussler and David Crosson, it was mostly a straight review show of then-current games and a few retro titles, with the occasional bit of silliness. Though it gained something of a cult fan base, it was a bit too ahead of its time (most internet connections were still on dial-up) and folded in 2000.

Fast forward to 2007: Mark Bussler uploads a few episodes on a little site known as YouTube to promote a DVD documentary about the show. The videos became much more popular than he expected, and in 2008, he decides to revive it as Classic Game Room HD with backing from the Inecom Company.

Classic Game Room is a standard review show without much in the way of bells and whistles, with most of the humor coming from Mark musing about the inherent Fridge Logic of the medium, or just letting loose about nothing in particular. Though the show is mostly about the games, it also has reviewed consoles, accessories, game packaging, and even more peripheral stuff (like food based on games). He has since spun-off CGR Garage which reviews die-cast toy cars.

, though due to controversial changes made to YouTube's content ID system in late 2013, CGR only released new episodes on the former official site, until a return to YouTube a few months later when some of the worst Content ID snags were worked out.

Due to declining revenues brought about by Content ID claims and changes to YouTube's revenue system, Mark announced in November 2015 that he would be closing the series regular run by the end of the year and continue it as a hobby. However, Mark reconsidered this after a large fan outcry and started a Patreon campaign

in January 2016 to continue the show under the name Classic Game Room Mk3.

In 2018, Mark announced that Classic Game Room was moving exclusively to Amazon Prime under the name Classic Game Room 2085 beginning in March of the same year, with Patreon donors having access to the show if they don't have Amazon Prime subscriptions. Instead of just being another name change like Mk3, 2085 is stated to be a straight-up reboot with higher production values.

On April 24, 2019, Bussler announced on Instagram that he had decided to end all video production, and to continue the Classic Game Room brand as a book publishing company. It has distributed books on video games, video production and American history. Busser has also made the jump into music production and the creation of podcasts.