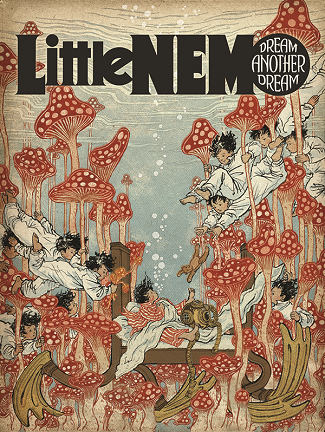 Little Nemo (originally Little Nemo in Slumberland, much later renamed for copyright reasons to In the Land of Wonderful Dreams), was a weekly Sunday comic strip written by Winsor McCay, which ran from 1905 to 1914. It featured the strange and surreal dreams of a young boy named Nemo. Strips often ended with Nemo waking up from terrifying situations his dreams had led him to.

In 1911 McCay produced a short animated film entitled Winsor McCay, the Famous Cartoonist of the N.Y. Herald and his Moving Comics

, also known simply as Little Nemo, featuring characters from Little Nemo comic strip. The film is considered an early landmark in animation and was admitted to the National Film Registry.

Years and years of Sunday strips, now in the Public Domain in the US, can be found in The Comic Strips Library

A Live-Adaptation was made in 1984, titled Nemo or Dream One, and a feature-length Animated Adaptation, Little Nemo: Adventures in Slumberland, was produced in the late Eighties. A new adaptation starring Jason Momoa is in the works.

Comic-book publisher IDW Publishing and writer Eric Shanower began a sequel series, Return to Slumberland, in which a modern child named Nemo is invited to Slumberland to become the princess's new playmate.

The comic has been referenced in many works in pop culture over the years since experiencing a slight resurgence of popularity in the 1980s. The music video for Tom Petty and the Heartbreakers' "Runnin' Down a Dream"

is an homage to the strips, as is the Genesis song "Scenes from a Night's Dream". A French Coldwave band named themselves Little Nemo in reference to the strip, and made occasional references to the comic in their videos

. Its 107th anniversary was celebrated by a very lengthy Google Doodle

Has nothing to do with either Captain Nemo or Finding Nemo, in case you were wondering.