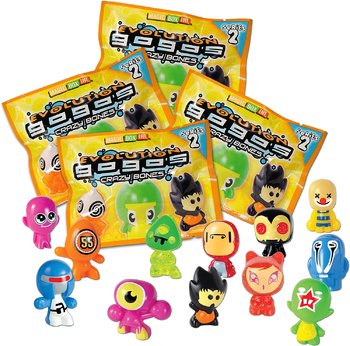 A series of collectible one-inch-long plastic figurines that were released by the European toy company Magic Box International and can be used to play various games. They are based off of a game called "Knucklebones" that children played in ancient Greece using the knuckle bones of sheep.

The collectible characters, called Gogo's, each have their own unique personality, and they also came in various colours. They also each had their own special ability starting from the 2007 reboot. Many series of this toy were released, most of which had some kind of theme to it, and every post-2007 series had a sticker album released with it so that you could attach the stickers that came in packs of Gogo's to the album. The reboot series were released by Panini in Latin America and Asia.

In 2007, Magic Box Int. rebooted the Gogo's Crazy Bones series, which succeeded once more, only to die in popularity again and slowly fade into obscurity afterwards. The reboot was distributed by PPI Worldwide, who own Magic Box. When the series was rebooted, the Gogo's went from unpainted and available in literally any colour to painted and available in a small number of colours usually about two to fivenote in North America and Europe, anyway; in Latin America and Asia, the Gogo's became available in both painted and unpainted variants, but the colours were still restricted to a certain number. Aside from that, each character also received arms and feet.

Tropes in the classic series:

Tropes in the reboot series:

Other tropes in the series: