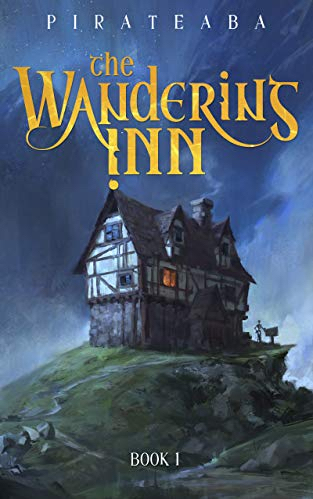 A tale of a girl, an inn, and a world full of levels.
The Wandering Inn

, by 'pirateaba', is an ongoing Web Serial Novel that follows the life of a young woman named Erin Solstice who finds herself in a fantasy world ruled by a leveling system and classes. However, instead of becoming a famous adventurer or hero, she becomes an innkeeper.
Advertisement:

The story initially focuses around Erin's attempts to survive in a hostile world where she does not know how to defend herself or even survive. Non-human species are the only people who live in the surrounding area, and Erin quickly finds that monsters and magic are an accepted part of this world. Erin is forced to reconcile herself with making moral choices such as killing in self defense — something which is completely unnatural to a normal girl from our world.

A second protagonist, Ryoka Griffin, is introduced later in the story. She has a different viewpoint and experience of the world than Erin does, and has to contend with her own share of adaptation to this new world. It is soon revealed that she and Erin are in fact only a few inter-dimensional travelers among many and that these events are affecting entire nations as ordinary people become adventurers and start creating waves wherever they appear.

The Wandering Inn began in July 2016 and updates regularly on Tuesdays and Saturdays. The author put out the first volume on Amazon Kindle, and it clocks in at A Song of Ice and Fire levels. Each successive volume is even bigger than its predecessor; in total the web serial exceeds 6.9 million words as of the end of Volume 7.

open/close all folders
A-M
N-Z
Magnolia: “A [Ninja]! Wouldn’t that be quite amazing to see? If I bought you some dark clothing, would you hang from the ceiling and jump out of the shadows to fill my cup?”
Advertisement: