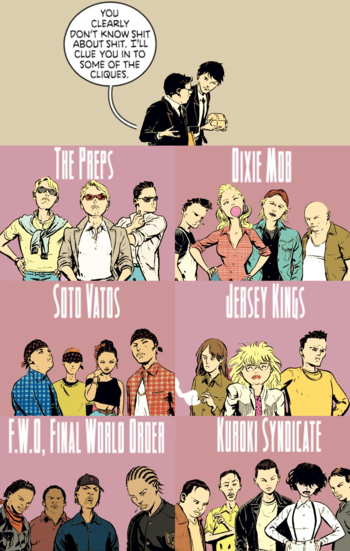 "Where you sit in the cafeteria is crucial because you got everybody there. You got your Freshmen, ROTC Guys, Preps, JV Jocks, Asian Nerds, Cool Asians, Varsity Jocks, Unfriendly Black Hotties, Girls Who Eat Their Feelings, Girls Who Don't Eat Anything, Desperate Wannabes, Burnouts, Sexually Active Band Geeks, the Greatest People You Will Ever Meet, and the Worst. Beware of The Plastics."
— Janis Ian, Mean Girls
Advertisement:

If half of all stories are "a stranger comes to town," then someone has to show that stranger around town. Said Naïve Newcomer is likely to get a Clique Tour. Someone points out the area's cliques and groups — which are usually Stereotypes or other familiar archetypes — to the newcomer and explains the Popularity Food Chain. Sometimes, there will be one clique/group that is humorously out of place or otherwise emphasized; in the case of the latter, this marks them as important. The tour may be paired with stereotypical activities or otherwise quick Establishing Character Moments for the entire clique, such as jocks introduced tossing footballs and shoving nerds into lockers, the Alpha Bitch and her Girl Posse verbally bullying someone, or nerds working on homework. One variation is to excise the newcomer entirely and have the society exposition done via As You Know dialogue or as narration to the audience.

The Clique Tour is a quick way to introduce the societal dynamics of a new location to both the newbie and the audience. This can take place in any location, such as schools (in this case, the work is usually a teen comedy/drama, and this trope is used to acclimate the Audience Surrogate, the New Transfer Student, or the Foreign Exchange Student), new towns/cities, or jails. In an Absurdly Divided School situation, this tour can serve to emphasize the division.

Kelly introduces Annabelle to the various cliques at St. Trinian's (and also Celia).

Kelly introduces Annabelle to the various cliques at St. Trinian's (and also Celia).