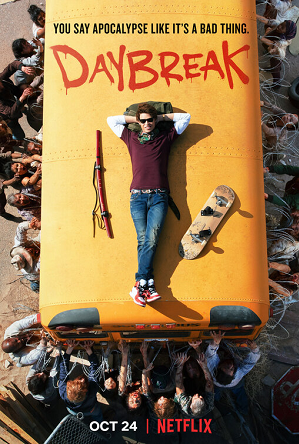 Daybreak is a 2019 teen horror-comedy-drama Netflix original series created by Brad Peyton and Aron Eli Coleite, (very loosely) based on the graphic novel of the same name.

Set After the End in Glendale, CA, where nuclear war and biological warfare have rendered the region a Teenage Wasteland. The series centers on 17-year-old high school student Josh Wheeler searching for his missing girlfriend Sam in the wasteland. He is joined by Angelica, a pyromaniac 10-year-old girl and former Jerk Jock turned pacifist samurai Wesley. Along the way they have to contend with the Ghoulies, mutants and various factions who have embraced post-apocalypse stereotypes.

There's a companion podcast set in the same universe titled The Only Podcast Left that follows a different cast that comments on the events of the main series while giving worldbuilding insight for the universe of the series.

The series was cancelled on December 16th, 2019 after one season.

No relation to the 2006 sci-fi crime series.