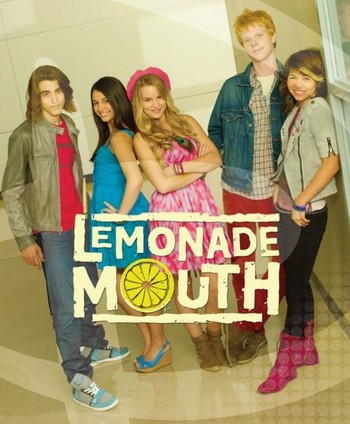 Be heard. Be strong. Be proud.
Advertisement:

A Disney Channel Original Movie based on a book of the same name by Mark Peter Hughes. It premiered on April 15, 2011.

Five high school students meet in detention and discover a shared love of music and organic lemonade. Despite a rocky start and constant interference from an arrogant, self-important rival band and a jerkass principal, they manage to form an anti-establishment rock band that takes off like a rocket.

It's about making friends, growing up, and saving a lemonade vending machine.

A sequel movie was planned by Disney but later canceled. That hasn't stopped Mark Peter Hughes from writing his own sequel: Lemonade Mouth Puckers Up which was published in late 2012.