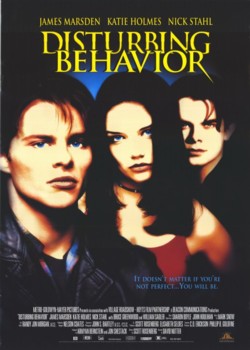 In Cradle Bay, it doesn't matter if you're not perfect. You will be.
Advertisement:

Disturbing Behavior is a 1998 sci-fi horror film directed by X-Files veteran David Nutter, which can best be described as The Stepford Wives for the Scream generation.

The film follows Steve Clark (James Marsden), a high school senior who has just moved to the town of Cradle Bay, Washington with his family. Here, he befriends three outcasts — stoners Gavin Strick (Nick Stahl) and UV (Chad E. Donella), and "bad girl" Rachel (Katie Holmes). Gavin has long been suspicious about the "Blue Ribbons," a group of preppy, highly intelligent and snobbish douchebags who are considered the school's "cream of the crop" and take part in a program led by the school's psychologist, Dr. Edgar Caldicott (Bruce Greenwood). The four students find out that the Blue Ribbons are far more sinister than they let up on, and may in fact be brainwashed... and that they are next.