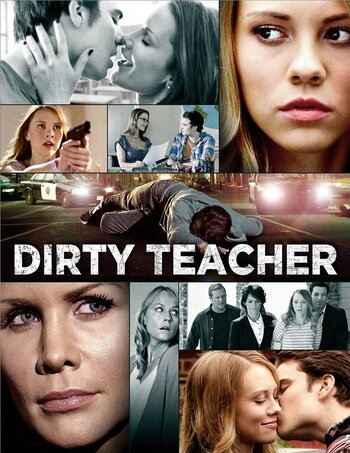 Dirty Teacher is a 2013 Lifetime Movie of the Week Thriller, written by Barbara Kymlicka and directed by Doug Campbell.

Molly Matson (Josie Davis) is a substitute teacher who's been hired to fill in for a high school English teacher on maternity leave. She immediately becomes smitten with one of her students, school baseball star Danny Campbell (Cameron Deane Stewart), who's in a volatile relationship with his classmate Jamie Hall (Kelcie Stranahan). Molly manipulates her way into Danny's life, becoming his tutor and eventually seducing him, while doing her best to mess things up between Danny and Jamie. But Molly proves to be Not Good with Rejection when Danny asks to break things off. She kills him, and decides to Frame-Up Jamie for the murder, which proves successful when Detectives Peters (Lesli Kay) and Allen (Brennan Elliott) arrest Jamie after a less-than-thorough investigation. It's up to Jamie and her mom Lauren (Darlene Vogel) to Clear Her Name.

No relation to Bad Teacher, though it maybe could be considered a Played for Drama Mockbuster of it.