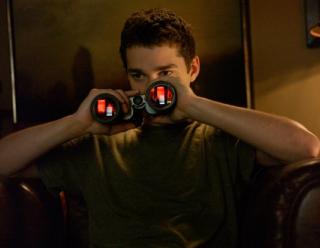 "Every killer lives next door to someone."
Advertisement:

Kale Brecht (Shia LaBeouf) is a troubled suburban teenager who loses his dad in a gruesome car accident. A year afterward, still raw from his dad's death and slipping behind in school, he assaults his Spanish teacher after he asks what Kale's father would've thought of his poor performance in class. He ends up getting sentenced to three months in house arrest, controlled by a GPS bracelet around his leg that only allows him to move within an electronic perimeter around his house. An immediate response alert is triggered by the bracelet if Kale ever steps outside this area.

Kale's shaky relationship with his mother Julie (Carrie-Anne Moss) gets worse when she cuts off his TV and internet access, while the policeman supervising his home detention Officer Gutiérrez (Jose Pablo Cantillo) is the happily vengeful cousin of the Spanish teacher, which turns Kale's situation from bad to worse. Imprisoned in his house, he has nothing to do all day but look out of his window and watch his neighbors. Monitoring their activities every waking hour, he sees one neighbor having an affair with his maid, kids watching porn when they are alone, the strange Robert Turner (David Morse) who may or may not be a killer, and the new girl next door Ashley (Sarah Roemer), who spends more time on her rooftop than inside her actual house. After meeting Ashley and watching her undress with her blinds open, she catches him in the act but eventually gets pulled into his obsessive search for the killer in the neighborhood.

Not to be confused with the Rihanna song.