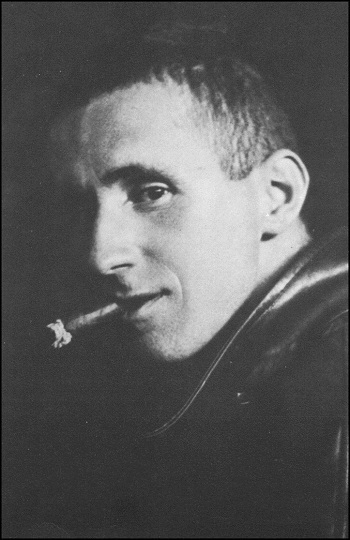 "In me you behold a man upon whom absolutely you can't rely"
"What keeps mankind alive?
The fact that millions are daily stifled,
tortured, punished, silenced and oppressed.
Mankind can keep alive thanks to its brilliance
— by keeping its humanity repressed.
For once, you must not try to shirk the facts:
mankind is kept alive by bestial acts."
— "What Keeps Mankind Alive"

Bertolt note He was born as Eugen Berthold Friedrich, but he adopted "Bertolt", or "Bert" for short, as the one name he actually used; he thought "Berthold" sounded too soft. Brecht (10 February 1898 – 14 August 1956) was a German poet, playwright, novelist and director. He was possibly the most influential force in early 20th century political art, with a strong focus on communism and anti-fascism — and probably most famous for The Threepenny Opera. He was a major figure in the art scene of the Weimar Republic and post-war Germany. Like many German artists, he fled Germany during World War II. When he returned to communist East Berlin, he was granted his own theatre, where the current ensemble still performs his plays daily.

Brecht was initially part of the post-World War I expressionist school, putting in dark and edgy plays like Baal about people on the margins of society complaining that life sucks and descending into nihilism and despair. These plays were often done in a naturalistic style with some stylization. Brecht's introduction to Marx however changed his attitude completely and he created a unique approach to 20th Century dramaturgy, one that was non-Aristotlian that is no longer bound by the rules laid down in Poetics, that a tragedy didn't have to provide catharsis or release, and that audiences should not immediately identify with heroic figures against villains, and of course that rather than a cast of small people and a short time frame, there should be Loads and Loads of Characters and action that covered several days. Thus was born "Epic Theatre".

One of his most important principles is of course, Verfremdungseffekt, or "effect of alienation". This was a method which discouraged immersion and escapism, and encouraged critical reception. This was often subject to Flanderization in pseudo-Brechtian productions but in Brecht's works alienation was against immersion and identification with characters but heightened immersion and attention to the social interactions, drama and context of character's choices and actions, this was part of the Marxist ideology of showing society, economics and politics at work in human relations. This made Brecht an early precursor to what we would call Postmodernism, the use of such effects, most directly in Breaking the Fourth Wall and talking to the audiences is often called in film classes as a 'Brechtian Device'. His stories were not meant as escapist fiction, but as scathing caricatures of what was wrong in society. For this reason, he developed certain tricks to prevent escapism: he encouraged his audiences to smoke while watching each play, discouraged method acting in his ensemble (he preferred using the classic, basic characters of the Commedia dell'Arte), used off-key instruments, and made his props out of flimsy cardboard. In short, he was a master of Stylistic Suck, such as tragedies ending with an unconvincing Happy Ending, a woman who tragically sings out that she really does value money more than her man and pithy references on why "Robbing a bank isn't as big a crime as owning one."

Very few of his works have an explicit moral, in the conventional sense. His plays relied heavily on Applicability, on foregrounding the social/economic and political factors of the narrative, shifting away from identifying solely with the main character's victory or defeat. His characters typically don't learn a thing, and end up perpetuating social repression and/or dying miserably. If a moral is stated at all, it's usually blatantly wrong. This way, Brecht encouraged his audience to think about the conditions of their characters, to identify with their social and political positions which make his characters too trapped to merit catharsis. This way, the audience, in theory, could use his plays to make their own reality better than that of the characters, by learning what the characters either refuse to learn or are incapable of learning. Brecht's emphasis on epic theatre, heavy unrealism and his use of period settings rather than contemporary setting departed heavily from the emerging Socialist Realism aesthetic. Brecht felt that by using period and fantastic settings, audiences can get a broader perspective on the events and characters than one from contemporary life while Orthodox Marxists criticized Brecht for indulging in over-aestheticization. This is one reason why Brecht's works tended to have relatively little influence behind the iron curtain and has had far more influence in the West, which suited Brecht perfectly fine since he always felt his plays were for a pre-revolutionary audience.

Typical features of his work include proud prostitutes, dead sailors, corrupt businessmen on the verge of bankruptcy, headstrong young women who are too headstrong to actually become independent in society, hopeful young soldiers who keep themselves blind to the real horrors of war, and what has been described as a genre of "water corpse poetry" (Wasserleichenpoesie). Considering himself a true communist, he stated that all art should belong to the people, to be constantly rewritten and re-interpreted as the political circumstances demanded. In practice, this meant that he refused to spend time even thinking about copyright, often drawing accusations of plagiarism. The reality of it was that he considered the circumstances in which a work of art was created more important than the source, and he actively encouraged others to adapt his works into new performances, without wanting credit for it. Ironically, after his death, Brecht's estate would be fierce in enforcing Brecht's copyright.

While not particularly noted for being a wit, he did get some moments of snark in, most famously his criticism of the Stalinist track of East Germany post-war: "Would it not be be simpler / If the government dissolved the people / And elected another?"

Brecht had a wide influence on various mediums of Theatre, Literature, Film and especially popular music. Several of the songs from his plays, and the style of his songwriting itself, has influenced many popular musicians. His songs with Weill have been frequently covered by the likes of Bobby Darin, Frank Sinatra, The Doors, David Bowie, Amanda Palmer, Marianne Faithfull, Tom Waits and Nina Simone, among many many others. His works have in turn influenced artists such as Bob Dylan, Douglas Sirk, Jean-Luc Godard, Pier Paolo Pasolini, Rainer Werner Fassbinder, Alan Moore and Lars von Trier.

Wrote a lot of plays.

Tropes frequently used in the work of Bertolt Brecht:

Adaptations of his works: