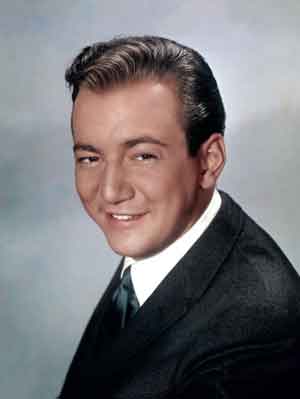 During his lifetime, Darin was also known for several other tropetastic points. First it is worth noting that Teen Idols as we know them didn't exist much until the 1950s and 1960s. In this way, Darin was a bit of a pioneer making very good use of television and movies to extend his image. He's the guy who inspired Sammy Davis Jr.. His acting roles weren't pure marketing either. He managed to get contracts with at least five major studios and won a Golden Globe, Cannes French Film Critics Award and an Academy Award nomination over his career.

Like many stars of his time, he headlined casinos but also became well associated with the Copacabana in New York. This means that he played his part in making the trope for all similarly named clubs in movies and their association with the tropical fruit hat. For his opening acts and later his production studios he fostered a lot of new talent such as Richard Pryor and Wayne Newton.

Darin had always had heart troubles due to rheumatic fever as a child and the fear of a short life always motivated him. Eventually his predictions were shown right when he died from blood poisoning and weakened heart valves at the age of 37. Kevin Spacey later made a biopic of his life named after his hit Beyond the Sea, directing, acting and singing the part himself, with Kate Bosworth playing his young wife Sandra Dee. If Lex Luthor marrying Lois Lane doesn't freak you out, then you'll find a generally insightful piece that manages to avoid a bland Too Good for This Sinful Earth vibe while still praising the man's talent and drive. In fact, it bombed, so really it was the film that was Too Good For This Sinful Audience Market.

His life and career provides examples of: