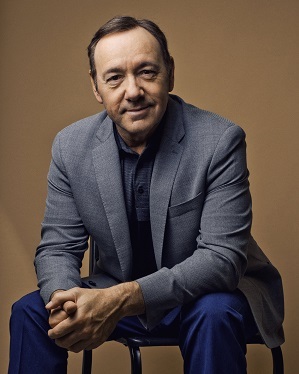 Though he claims to be a theater actor at heart and always puts the stage before the screen, he has had roles in countless films, including...

From 2013 to 2017, he also starred in the Netflix original series House of Cards as the morally ambiguous congressman Francis Underwood (he was also one of the show's executive producers).

In addition to his dramatic and comedic roles, Spacey is well-known as one of the best impressionists in Hollywood, as demonstrated on

Inside the Actors Studio and his multiple Saturday Night Live appearances.

In October 2017, actor Anthony Rapp accused Spacey of having made sexual advances toward him in 1986, when Rapp was 14 years old and Spacey was 24. Spacey responded on his Twitter feed that he had no memory of the encounter, but offered his "sincerest apology for what would have been deeply inappropriate drunken behavior." In the same tweet, Spacey publicly came out as gay, which caused outrage in the LGBTQ community, which accused Spacey of using a Coming-Out Story as a distraction from the allegations (and also because it feeds into an idea that they really don't want to be associated with). Shortly thereafter, Harry Dreyfuss accused Spacey of assaulting him in 2008, and several others came forward with similar accusations. Outside the film industry, the Old Vic Theatre in London announced that twenty different people had accused him of sexual harassment/assault during his tenure as Artistic Director, with fourteen allegations relating to behaviour that would constitute criminal offenses.

As a result, Spacey quickly became a Persona Non Grata in the entertainment industry. He was fired from Cards and removed outright from the already completed film All the Money in the World.note He actually still has one shot in the final film, although it takes an eagle-eyed viewer to notice it. Netflix also cancelled the production of a Gore Vidal biopic in which Spacey was supposed to star. His most recent film to date, Billionaire Boys Club, was completed long before the allegations came to light, but had trouble finding a distributor, even before his fall from grace. It took over two years to be released, and when it was, it posted miserable opening day numbers at the box office.note Reported domestic box office for opening day was $126, and total domestic box office during its very short release was $618. The charges were all eventually dismissed (as most of them had crossed the statute of limitations), and Spacey is set to appear in Franco Nero's L'uomo Che Disegnò Dio (The Man Who Drew God).

In the time since the allegations broke, Spacey also made a name for himself through his YouTube channel

by posting three videos on Christmas Eve from 2018 to 2020 without any explanation, confounding the Internet. In the first two, he gave monologues while in character as Frank Underwood, his House of Cards character, which many interpreted as alluding to his real-life sentiments on his allegations in some indiscernible way. In the third, he began the same as before but then broke character to speak as himself, expressing sympathy amid the COVID-19 Pandemic and promoting several hotlines.