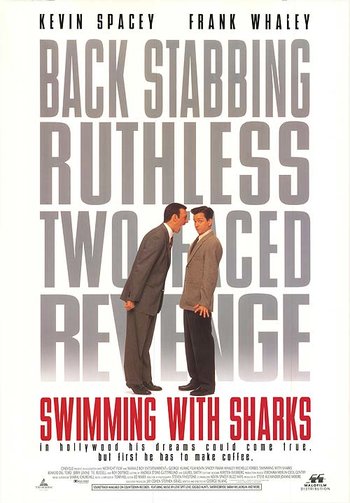 "Things are rough now, but they'll get better. I promise, Guy. If you prove you can manage these tasks, if you work hard now, then you're rewarded. You get to have some fun. Because don't ever forget, this job is very big on payback."
— Buddy Ackerman
Advertisement:

A 1994 crime drama written and directed by George Huang, starring Kevin Spacey, Frank Whaley, and Michelle Forbes, with a brief appearance by Benicio del Toro. The film revolves around a guy named Guy, who gets a high-profile job as the personal assistant to corporate bigwig Jerkass Mean Boss Buddy Ackerman. The film details the events, mainly in flashback, that lead from his first day on the job to the brutal kidnapping and torture of Buddy.

This film is at once a gripping thriller, a satirical Deconstruction of people's view of the glamorous world of film production and show business, and a brutal love-triangle scenario mixed with Grey-and-Gray Morality.