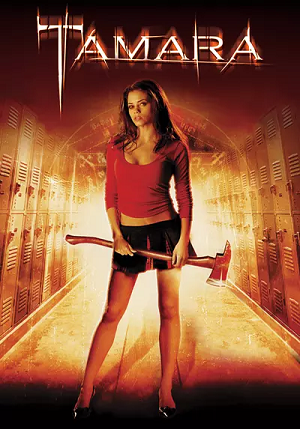 Revenge has a killer body.
Advertisement:

Tamara Riley is a mousy, withdrawn girl whose exposure of the football team's steroid use to the newspapers made her the personal enemy of half the school. Not helping matters is the fact that she's also into both witchcraft and her English teacher, Bill Natolly. After attempting to cast a love spell but not having the guts to actually spill her blood to complete the ritual, Tamara is taken in by a prank by her vengeful classmates, pretending to be Bill so that they can humiliate her on camera. In the commotion, however, Tamara is killed by accident, forcing the kids to hide her body and pretend that nothing happened. Briefly, it seems to have worked.

Problem is, that blow to her head was just the thing to complete Tamara's ritual. She comes Back from the Dead looking better than ever, equipped with the power to read and control people's minds and perceptions with only a touch. And she is madder than hell.

As you can guess, the plot can pretty much be summed up as "Carrie, only with witchcraft and more gore," to the point where it could've served as a remake of, or sequel to, that film with a few script changes (it wouldn't have been the first time, either). It can, however, be quite entertaining if you go in with the right mindset.

A novelization based on an earlier, more extreme script for the film was written by Jeffrey Reddick and JD Matthews, and released in 2014. For that version see Tamara.