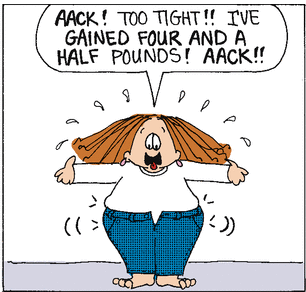 "You start out happy that you have no hips or boobs. All of a sudden you get them, and it feels sloppy. Then just when you start liking them, they start drooping."
— Cindy Crawford
Advertisement:

In a world where being very skinny (or buff if you're a guy) is the ideal and being overweight is dreaded, many people are self-conscious about their weight.

These (usually female) characters are obsessed with dieting (or occasionally, working out) in order to reach the ideal; commenting on their figure is often a sensitive point for them. However, not all characters with Weight Woe are overweight; many are just Hollywood Pudgy, and some are even told in-verse that they don't need to lose weight at all.

Sometimes this is a one-episode affair, usually because someone brings their weight up or they want to impress their Love Interest, but just as often it is a character quirk. In the latter case, the character is usually a yo-yo dieter or has too little willpower to keep it up so nothing about their figure changes.

In real life, eating disorders of any kind are never funny, and sufferers should seek immediate help. Media often dictates that one must be thin in order to be attractive, sometimes unrealistically so. However, eating disorders are more complicated than that, involving many factors ranging from feelings of lack of control to loneliness to inadequacy in other ways. Eating disorders can contribute to fatality if they go untreated.

In fiction, however, Weight Woe is usually Played for Laughs, most likely because of its sensitive nature and prevalence in real life. Even in a Very Special Episode they are portrayed as easily treatable, with the sufferer getting over them by the end of the episode when in truth recovery can take months or years. Additionally, the cause is almost always solely to do with a character's physical appearance, whether the issue is genuine or perceived.

Subtrope of Appearance Angst. A Sister Trope of Muscle Angst. Often tied into A Weighty Aesop or a Missed Meal Aesop.

Compare Huge School Girl, a girl who is much taller and more developed than her peers and is insecure about it, Height Angst, where a character is self-conscious about their height instead of their width, and Real Women Have Curves, where higher body fat is portrayed as the ideal. Contrast Fat and Proud Big Beautiful Women/Big Beautiful Men—the former of whom are comfortable with their size and the latter are portrayed as sexy despite or because they are overweight. Both compare and contrast Obsessed with Food, as a person who is self-conscious about their weight will very often be obsessed with food itself as well, though it will not seem like it on the surface.

He's not particularly happy of having a gut as shown in "We Don't Talk About Bruno".

He's not particularly happy of having a gut as shown in "We Don't Talk About Bruno".