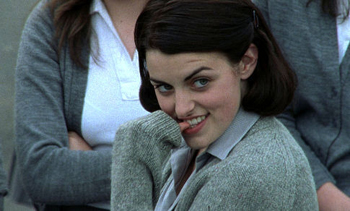 The Magdalene Sisters is an Irish drama film directed by Peter Mullan. It was inspired by the documentary Sex In A Cold Climate and delves into one of the darker parts of Ireland's history - the Magdalene laundries. The laundries were originally established in Victorian times as a place to shelter women deemed "fallen" by society and they eventually evolved into places where any woman who was deemed corrupt by the Church was sent there for the rest of her life. The women were put to work in the laundries and kept under the supervision of nuns who punished them cruelly. The only way to leave the laundry was for two men over 18 to sign the woman out.

This film follows four women in one of the laundries in the 1960s. We have Margaret, a woman raped by her cousin at a wedding and sent there because she is no longer a virgin. There's Rose, who has just had a baby out of wedlock, being forced to put him up for adoption before being sent away. Bernadette is a teenage orphan sent to the laundry because she was thought to be too flirtatious with some of the local boys and, unlike the other girls, she is still a virgin. There's Crispina, sent to the laundry years ago for having a baby out of wedlock and is now quite unstable. The entire laundry is run by the malevolent Sister Bridget.