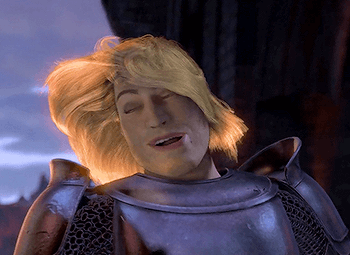 Or, in this case, his.
Advertisement:

Imagine this picture: a woman with her hair tied up in and held in place only with a pin or some kind of stick, usually as a Prim and Proper Bun. (Or a Glasses and Ponytail Coverup.) She pulls it out of her hair and shakes it out, allowing it to fall down freely. This is sometimes accompanied by a Dramatic Wind.

This trope is usually part of a romantic scene or something dramatic, though it is also frequently parodied. The woman will usually be dressed up to the nines, and letting her hair out of its fancy updo is often the first step towards her undressing for her lover. Or attacking someone with the Combat Haircomb that held up her hair. A lot of the time this woman will have beautiful long hair, but the hair just needs to be long enough to tie up, so past the shoulders at the shortest.

Compare Letting Her Hair Down when a woman is shown wearing her hair down or looser to show how she's relaxing as a character, and Slipknot Ponytail when the hair gradually becomes undone on its own. Sometimes overlaps with Beautiful All Along. Could be seen as a sister trope to the Important Haircut without any actual hair cutting. If it's done for Fanservice then it'll usually be accompanied by a Hair Flip. It's also not uncommon to have this happen during a striptease.