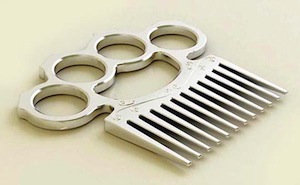 For hardcore combers!
'"Have you heard of the Kunoichi? [...] It's the deadly sisterhood of the Ninja, originally Japanese. Like the geishas, they were trained in singing and entertaining so they could get access into the household of an enemy warlord, and just when he'd gotten her nice and cosy in his arms he'd end up with an icepick through the ear into the brain — one of their favourite tricks, in my language the ssu chieh wen — the kiss of death."
— Quiller's Run
Advertisement:

Women get all the best Hidden Weapons. A woman with a Combat Haircomb has an ornamental comb or pin to fasten her hair that is also a dagger or other sharp implement. It may be inside a sheath, or the hair itself may serve to hide the blade. It's very popular for spies and assassins as well as undercover warriors who need to blend in to high society functions.

In a pinch, chopstick-style plain wood hairpins can be used this way, as an Improvised Weapon. Another variant is to use a big brush comb and use the handle to hide a weapon or as a blade. In rare cases, it's an actual comb, albeit with poison tips.

See also Nothing Up My Sleeve, Slipknot Ponytail, and Victoria's Secret Compartment. Subtrope to Arsenal Attire.

Adiane is beating down Yoko with her scorpion tail, even ripping off her top, before Yoko improvises her hairpins as needles to pin down Adiane's tail to the floor.

Adiane is beating down Yoko with her scorpion tail, even ripping off her top, before Yoko improvises her hairpins as needles to pin down Adiane's tail to the floor.