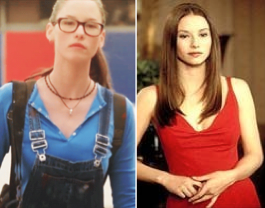 "No no, not Janey Briggs! She's got glasses. And a ponytail!"
"Really, specs? And suddenly she's not the most beautiful woman you've ever seen?"
— Etta Candy, Wonder Woman
Advertisement:

There is one favorite Hollywood method to change a character's appearance massively without having to actually change the actor's appearance to unrecognisable levels. A ponytail, and a pair of glasses.

The superficial features of the character's appearance have been changed enough that the Willing Suspension of Disbelief is not broken when other characters don't recognise them but for most viewers, they are still obviously the same character. The idea became so prevalent that it also moved to non-visual media, with the glasses-and-ponytail being an indicator of plainness. Adding or removing these items to/from a girl may be used as a disguise, with removing them also being used to clean up nicely.

Most typically used as a form of Paper-Thin Disguise or for She Cleans Up Nicely (the glasses and ponytail look usually invokes Hollywood Homely). Usually Always Female, but not necessarily. In either case, glasses and ponytail (or really any style that does the hair up one way or the other) is a stock 'coverup' used and enforced to make a character (recognisably) unrecognisable.

See also Nerds Are Sexy, The Glasses Gotta Go (an ugly girl with glasses discovers that she looks better without them), Smart People Wear Glasses, Long Hair Is Feminine (since a ponytail would be perceived as less feminine), Tomboyish Ponytail, and Shaking Her Hair Loose/Letting Her Hair Down. Contrast Endearingly Dorky.