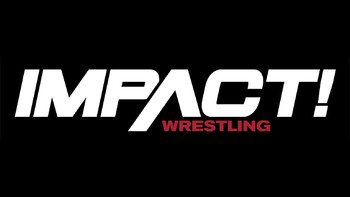 We own the night! note The current theme music of Impact's weekly show introduced in the Summer of 2020
Advertisement:

At the conclusion of the Monday Night Wars on March 26, 2001, WWE became the dominant wrestling company in the United States. From its ashes, several smaller promotions were founded to cater to the various niches displaced by WWE's programming.

One of these was Impact Wrestling (known as Total Nonstop Action (TNA) Wrestling from 2004 to 2017), a former NWA affiliate founded by Jerry Jarrett and his son Jeff in 2002 as a reaction to the latter's falling-out with WWE.

Since its establishment, the promotion has been known for:

TNA's original business model concentrated on offering low-priced, weekly pay-per-view events broadcasting out of "The Asylum", the nickname for the Tennessee State Fairground Sports Arena located in Nashville, which was the Jarretts' stomping grounds. Unfortunately, they were unable to attract enough regular buyers to turn a profit, and eventually they was bought out by a power-plant company called Panda Energy. With the considerable financial backing of their new owners, TNA would slowly cut ties from the NWA, changing their name to "Total Nonstop Action Wrestling" (TNA) in 2004, and creating their own championship titles after their agreement to use the NWA's titles came to an end in May 2007. In October 2002, TNA launched their first television series called Xplosion!, which was used to promote the weekly PPVs.

In May 2004, TNA got a new TV deal with Fox SportsNet and began to take on a contemporary business model. TNA's new flagship program, iMPACT! premiered in June 2004, and the company would eventually adopt monthly pay-per-views. When the Fox deal expired in May of 2005, Impact became a Web Original for a few months until Spike TV picked up the series in October. This new deal with Spike was lucrative enough for TNA to finally make a profit thanks to television licensing fees. For nine years (2004-2013), TNA taped its programing at the "Impact Zone", a soundstage at Universal Studios Florida, while occasionally hosting PPVs and other events across the U.S and other countries.

While "Impact Zone"'s static location maximized production values at minimum cost, TNA could not make money from entry tickets because it was classified as a theme park attraction. That ultimately did little to dissuade TNA, as while the booking could be a bit mercurial, it quickly began to distinguish itself on Spike by both snapping up established talent from WCW and ECW, such as Kevin Nash and Scott Steiner, but also talents that were either on their way out from the WWE or looking for their big break on TV from ROH; such as Kurt Angle, Samoa Joe, and AJ Styles. Supplementing all of this was the "X-Division", an openweight division largely known for it's high work-rate and excellent opening matches on PP Vs; showcasing smaller, cruiserweight talent in a way that had previously only been done in WCW. Things were progressing smoothly for TNA, though never entirely free from controversy or haphazard decisionmaking, it produced a competent alternative to the Fed's content that fans fell in love with.

And then, in October of 2009, President Dixie Carter announced that TNA had signed up with Eric Bischoff and Hulk Hogan.

Hogan and Bischoff were hired primarily to be creative consultants, but that also meant they mostly had the ability to do what they wanted, which was felt right away. Their tenure featured a litany of very unpopular changes throughout 2010; less focus on the talents that had come to define TNA and more on friends of Bischoff and Hogan, the loss of the beloved six-sided ring, nonsensical invasion angles, and an increased dependence on purely ex-WWE talent to attempt to draw crowds, all wrapped up in a disastrous attempted switch to being promoted live opposite to Monday Night RAW, which crushed it soundly through every week, before they returned to Thursday nights without any fanfare. This would coincide with a series of negative business decisions that all but ensured TNA's gains were for naught; they would never again see the kind of highs they had seen in the late 00's.

Beginning in March 2013, TNA attempted to permanently leave Universal Studios and tape Impact! on the road, but they could not sell enough tickets to cover the travel costs. Not only would TNA be forced to return to the Impact Zone, the company would also make drastic cutbacks in almost every area of business, and fans could feel it. An exodus of talent would occur throughout late 2013, and Spike would continue to air TNA programming until the end of 2014, when it refused to renew it's contract with the company.

Impact! was then moved to Pop TV in 2016. During their time on Pop, Carter would sell majority ownership of the company to Canadian broadcast and media company Anthem Sports and Entertainment (who owned TNA's native broadcaster in Fight Network). Anthem would formally announced ownership of the company on January 3, 2017. In the months that followed, the TNA brand would be dropped for good and, in March of that year, "Impact Wrestling" officially became the new name of the company. In late June 2017, Impact announced a merger with Global Force Wrestling, a short-lived successor promotion founded by Jeff Jarrett, which Impact had previously had done some crossovers with. Originally, the plan was for the combined company to adopt the "GFW" branding while keeping Impact! as the name of the television series. As part of the merger, Impact would launch their own streaming service called the "Global Wrestling Network". However, following a series of incidents, Jarrett would be placed on a "leave of absence" in September 2017. The Impact-GFW merger, which had never been fully completed at a legal level, was called off in October 2017.

At the beginning of 2018, Anthem would hire Don Callis (formerly known as the Jackal in the WWF and Cyrus the Virus in ECW) and Scott D'Amore, both of whom had worked for the company in the past, as the new co-Executive Vice Presidents in charge of day-to-day operations. The new management launched in earnest with the return of a four-sided ring and their first PPV of the year being aptly-named Redemption. Throughout 2018, Impact Wrestling would establish a partnership with Twitch to stream free, live events on the platform; return to touring on the road; and resume working with other promotions, such as Lucha Underground.

After the Pop deal ended, Impact's weekly TV show began airing on the Anthem-owned Pursuit Channel in 2019, in addition to streaming on Twitch to make for the former's low distribution. Later that year, Anthem bought a majority share of AXS TV, prompting Impact! to move to the network on October 29, where they have been ever since.

"We know those tropes, Taz! What are they doing in the Impact Zone?"