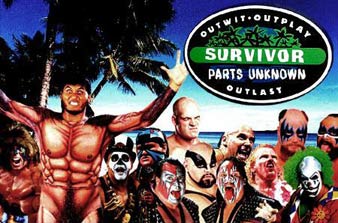 WrestleCrap shows us what happens when other shows get in on the Parts Unknown game.
Advertisement:

The standard Professional Wrestling ring introduction consists of four parts: hometown, height, weight, and name. However, there are some cases where one might not want to give a hometown; after all, if you have a quasi-mystical Made of Iron badass loner, it would probably rob them of some of their mystique if they were from Joisey. The solution? Announce them as being "from Parts Unknown".

Parts Unknown, simply put, is wrestling speak for "we don't know where the hell this person's from." However, it's taken on a life of its own in wrestling fandom, where it's become popular to depict Parts Unknown as a real place that's home to some very unreal personalities. Possibly as a result of this, most wrestling promoters have changed from using Parts Unknown to using more descriptive, though equally non-specific, hometowns. Many of these variations on "Parts Unknown" are bizarre and sometimes straight-up impossible, as in they don't physically exist. But if it's a Wrestling Monster whose gimmick involves being violently insane, it's not like anybody's going to argue with them if they say they're from the depths of Hell.

This is also often used in video games, specifically Fighting Games. This is probably due to the fact that nationality can often lead to preconceived notions about how a character should look and behave. Parts Unknown avoids this situation, especially with regards to certain characters who are not designed with any specific cultural/nationality tropes in mind, meaning that it is regularly applied to overtly mysterious, more fantastical characters. It's also regularly applied to Final Bosses.

As an aside, when used too liberally amongst a series' characters, this becomes unrealistic. After all, most people, especially in modern settings, do have a nationality and are aware of where they were born. Though "Parts Unknown" doesn't necessarily mean the character themself is unaware of where they're from; it could just be that they're not telling anybody else. See also Non-Specifically Foreign and Undisclosed Native.