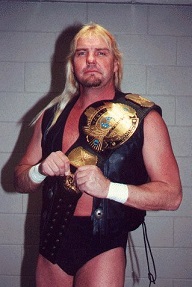 Barry Clinton Windham (born July 4, 1960) is a retired American Professional Wrestler from Sweetwater, TX best known for his work in the 1980s and 1990s for WWE and WCW. He debuted in 1979 and first made his name competing in Florida. He went up to WWE in 1984 with Mike Rotunda as the tag team the U.S. Express. They defeated Adrian Adonis and Dick Murdoch for the WWE World Tag Team Titles

, which they lost to The Iron Sheik and Nikolai Volkoff at the first WrestleMania. Barry went back to Florida until the territory closed in 1987, and he was brought up to Charlotte by National Wrestling Alliance promoter Jim Crockett. Barry had a run as a member of the Four Horsemen in 1988-1989 before he briefly went back to WWE as The Widowmaker. He returned to WCW in 1990, rejoining the Horsemen. This lasted until Real Life Pointy-Haired Boss Jim Herd fired Flair right before the WCW The Great American Bash 1991 PPV. Barry would be turned face due to Larry Zbyszko smashing Barry's hand in a car door at the start of WCW Halloween Havoc 1991. Barry stayed face until he turned on partner Dustin Rhodes in late 1992. He disappeared from WCW in mid-1994 and resurfaced in WWE as The Stalker in 1996. In 1997, he and Justin Hawk Bradshaw were repackaged as The New Blackjacks, a Generation Xerox of The Blackjacks, Barry's father's team from the 1970s. This lasted until Barry turned heel in early 1998 to join Jim Cornette's NWA group, before leaving the company. Barry resurfaced in WCW in late 1998, turning on Ric Flair and joining the NWO. He then joined Curt Hennig's West Texas Rednecks, before leaving the company in the fall. He has also competed for New Japan Pro-Wrestling, All Japan Pro Wrestling, the American Wrestling Association, MLW and some independents. He retired in 2004. Among his in-ring achievements, he is a former NWA World Heavyweight Champion

, and was inducted into the WWE Hall of Fame as a member of the Four Horsemen in 2012.